Well this is not how I anticipated my week going.

I came down with a bad cold Saturday night, after getting home from a road trip to Ames. I had the worst body aches – you know, the kind where even your hair hurts. I went to bed early hoping it was just tiredness from the trip but I awoke on Sunday feeling just as crappy.

I rested as much as I could on Sunday – as much as a 1-year-old will let you. Took a nap in the morning and laid on the couch most of the day watching football. I was in bed immediately after Desperate Housewives was over – hey, a girl’s gotta have priorities!

I tossed and turned all night and knew that I should not go to work on Monday. But, my FIL was coming over to spend time with Munchkin and I figured I wouldn’t get much rest at home. Besides, I have a desk job – how taxing could that be? So I went in to work. That was my first mistake of the day.

Got to work and had a relatively quiet morning. I had taken some DayQuil and Ibuprofen which seemed to keep the aches at bay. Wasn’t congested or anything but my stomach was queasy most of the day and I did feel light-headed. I had an orange for a mid-morning snack and then some soup and crackers/cheese for lunch. That’s not as much as I normally eat but I was afraid I’d puke if I ate too much. Second mistake of the day.

I tried to push the fluids, and thought I was doing a good job. I’ve blogged before about how I am a slow drinker and have a hard time getting my water in for the day. Monday was no exception. So, I didn’t get enough to drink. Third mistake.

After eating, I went for a walk around the mall with some co-workers and we found some really fun new things (more on that in this Friday’s edition of Annexed). I was actually feeling fairly decent, aside from the heavy coat of “ickiness” that comes when you’re sick. I had a meeting at 1pm so I headed in there to get everything set up.  The room was hot and had almost no circulation. I had a fan going right next to me but it did nothing to cut the air.

As soon as we got started, I felt it. My stomach was really feeling nauseous and I started to get shaky. I was drinking a 7-Up and kept sipping it hoping that would help. It didn’t. I tried to lean my head back in the chair and get comfortable, praying that I would be able to make it through the next 3 hours of meeting – thank God I wasn’t the one facilitating. After about 20 minutes it started to get worse. I seriously thought I was going to throw up and did NOT want to do that in a conference room full of people.  So I casually got up and snuck out of the room, making a beeline for the bathroom. That was at about 1:20pm.

A cleaning lady was in there but I didn’t care. I ducked in the first stall and sat down. My whole body was shaking, my stomach was doing flips and my vision was starting to get blurry. I put my head between my knees because they always tell you to do that if you feel light-headed or dizzy. It didn’t help. I took off my glasses and set them aside. Then the dream started.

I don’t remember what it was about but I know I had a dream. It was a nice one too. Suddenly I opened my eyes and for a second had no idea where I was. Then I saw the underside of the toilet and realized I had fainted and was on the floor of the stall. I managed to get myself up and sitting again. That’s when everyone came running in. Apparently the cleaning lady had run out to get help when I fainted. It was the folks from my meeting shouting my name and asking if I was ok. The co-dependent in my almost said “yes, I’m fine” but then I realized that was far from the truth so I eeked out a “No, I just fainted.”

My dear co-worker Vicki came in and asked if I could open the stall door and I did. She came in with cold clothes for my neck and head. I looked at my watch and it was 1:35pm. I remember asking how long I had been out and no one knew. It was a whirlwind then. People were taking my pulse. Everyone had an opinion on what happened and what should be done next. Eventually they all agreed I should go back to my desk and Vicki helped me get there.

Someone suggested calling Security so they did. I remember feeling a throbbing in my head and that’s when I realized I had hit it pretty hard on the floor. My knee and ankle hurt too (I would later realize that I had fallen forward and twisted to the right, hitting my upper back on the stall door and then my head and knee on the bathroom floor). Security got there pretty quick and started asking all kinds of questions. What happened? Had I been sick? Did I eat/drink enough today? Was I on any medication? They decided it was necessary to call 911 and get me to the hospital. The paramedics literally got there in less than 5 minutes.

They asked me all the same questions and then some more. They took my blood pressure (90 over something) then had me stand up and took it again (80 over something). They told me they were going to take me to the hospital and helped me on to the gurney. They strapped me down and whisked me away. Everyone was staring. The funny part is that one of the EMTs started talking to me about how hopping the mall was back in the day and how it seemed like a ghost town now. LOL. Tell me about it dude.

They loaded me in the ambulance and off we went (they didn’t use the sirens though, darn!). The head guy immediately hooked me up to an IV and started asking more questions. He also gave me something to keep me from throwing up. I was appreciative of that. We were at the hospital really quick and the docs were waiting. They zipped me off to a room, hooked me up to chest monitors, drew blood and then left me.

Vicki had followed us over there and kept me company in the room. I really appreciated that. Kept me from worrying and helped pass the time. We watched VH1 Behind The Music on Jennifer Hudson and then another one on Eve. We both agree that Eve needs to wear a bra more. Vicki took a few pics of me too. 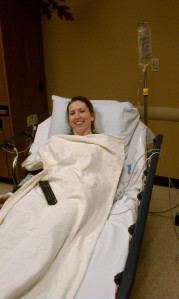 Vicki says I look too healthy in this pic. LOL. Trust me, I was feeling crappy. 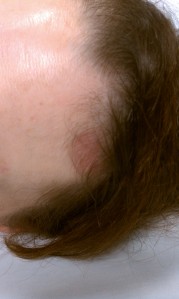 Close-up of the knot developing on my head

The doc came in and said that my white blood cell count was low, as was my calcium. She wanted to do a CT Scan of my chest and an MRI of my head (apparently they need confirmation that I have a brain).  They also ordered a pregnancy test.

I was whisked off to the CT area but the preggo test results hadn’t come back yet and they couldn’t do the scan until they had that. I could have told them I wasn’t preggers but they had to check.  So I waited. And waited. A shift change happened and my gal left. I waited some more. Finally the results were back – no baby – and they took me in to do the scan. After that, I was carted off to have the MRI done. They took every possible angle of my head there could be. I was in the tube for 35 minutes. It was actually kind of nice because it gave me some quiet time to rest. Once that was done I went back to the room.

The results came back and low and behold, I do have a brain! Phew! 🙂 Everything checked out ok and gave them no further leads on the white blood cells or calcium readings. At that point, doc said they were going to let me go and suggested I follow-up with my regular doc in the morning. CJ was there by then and took me home.

Tuesday, I got in to my doc’s and he confirmed that I have a concussion from hitting my head on the floor. Must have whacked it pretty good to rattle my brain so! He said the low readings are probably due to the virus I have but he drew more blood just in case. I was told to stay home from work for a few more days.

So, that’s my story. Today I feel worse than yesterday. The concussion is intensifying the cold symptoms making the nausea and dizziness worse. My knee is doing better today though. I’m hoping that this is the “bottom” and tomorrow I will start feeling better.

A couple big lessons I’ve learned: 1) it’s ok to take it easy, 2) I need to ask for help when I need it and 3) I really do need to drink more than I do.  I’ve had a lot of friends send well wishes and I do appreciate all the love. It helps more than you know!

8 thoughts on “The Faint of Heart”