Today I stopped by Panera on my way to work to grab a breakfast sandwich and some cookies for an afternoon meeting (tip: if you want people to participate, bring food. Works every time…). I found an awesome pull through spot and eagerly pulled in next to a shiny white Lexus. As I was getting out, I glanced in the window and, I kid you not, there were Kleenex EVERYWHERE! They were on the passenger seat, the floor of the passenger side, the console and the dashboard. There were probably more on the driver’s side and in the back but I didn’t look that close. Was afraid the cesspool of germs that are no doubt thriving in that car would seep out and leach on to me if I stood there any longer.

One thing I’ve learned over the years is that you can tell a lot about a person by the way they keep their desk at work. Our offices/cubes are like second homes and most of the time they end up looking about the same way our houses do, which is often a reflection of us as people.

Let’s analyze, shall we?

Here’s a pic of my desk at The Mall (if you click on it, you can see a larger version with my notes on it). Keep in mind that I’m a contractor here so while I am not employed by the company inside the mall, I have been stationed here for several years, which accounts for why my desk looks so “lived in”. If I was consulting at a company for only a month or so, my desk wouldn’t look nearly this permanent. 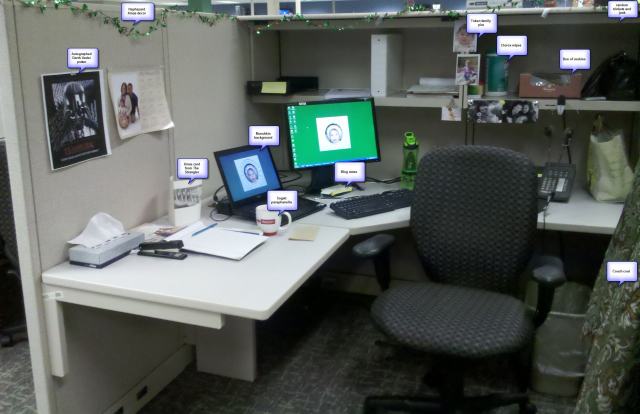 I know, I know. It’s not the tidiest desk in the world. But it’s not the messiest either. Believe you me, I’ve worked with some messy people…So what does this all mean? What kind of person does this stuff say that I am? Wait for something really deep and profound…

You tell me – what do you think? What does all this stuff say about me?