CJ and I enjoy sending Christmas cards and every year we send one with a family picture on it.

Here we are in 2006 (our first Christmas as a married couple):

We looked so in love, didn’t we? Also notice that I’m practically strangling Samson to get him to hold still (he was almost a year old). We actually had a treat balanced on top of the camera so that he would look in that direction. When I let go he lunged for it and knocked the tripod over. Goofball.

Then we thought we’d be creative and do one highlighting just how naughty Samson was as a puppy (yet, so darn cute! I just want to snuggle up to his wittle fuzzy face…):

And then we got really creative and did a retro card (1950’s theme): 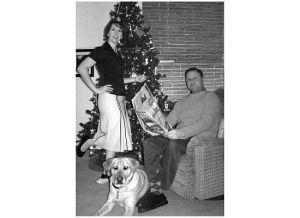 I had to Photoshop several different pics together for this one. I took the base image of me and the tree and then added in CJ and Samson from different pics. I also digitally added in the fireplace (we don’t have one).

And then Munchkin came along and we had to add her to the mix! 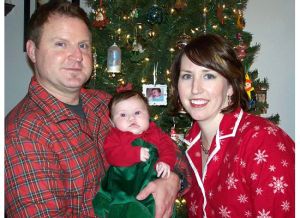 As mentioned yesterday, we originally wanted Samson in this pic too but gave up after a while.

Each year it gets harder and harder to come up with new ideas. And it becomes even harder to actually get them to turn out now that we have a spunky labrador and active toddler to contend with.

So we decided to split it. I took the pics of CJ with Munchkin and CJ took pics of me with Samson. There were still some mishaps and frustrations (for example, we have a new camera and CJ was having issues getting it to take the pic when he wanted it to) but in the end we got what we needed. We had to once again use treats to keep Samson in place and we used The Wiggles to keep Munchkin still. So if it looks like she has a glazed look in her eye, it’s because she’s engrossed in Captain Feathersword.

Here are some of the outtakes:

Munchkin walking in front of the camera

Munchkin in the shot again..carrying her Elmo book

You’ll have to wait to see the final card. Don’t want to give it all away just yet!

3 thoughts on “Treats and The Wiggles”