I love me a good to do list. This is for 2 reasons.

Yesterday was one of those days.

First of all, let me just say how nice it was to have the day AFTER Christmas off. That extra day really helped get things reset and back to normal before starting work again.

Boy did we take advantage! Originally we considered using the day to catch a movie or something but that would involve a baby-sitter (we feel Isabella is too young yet for movies, even the kids ones). Plus, that would take valuables hours away from the many tasks that have been piling up. Owning a house – and particularly having just moved – means no end to chores, fixes, repairs, remodels, etc. So we opted to stay home and get stuff done.

I didn’t actually write out a list, which is unusual for me, but I was checking one off in my head. Here’s everything I got done:

CJ got a whole bunch of other stuff done too, from his own list.

Boy did it feel good! I went to bed last night exhausted yet satisfied.

Switching gears a bit. I’m not going to write a whole Christmas re-cap post this year because frankly, I’m ready to move on. I love the holidays and we had an awesome weekend, but I’d rather leave it be and quietly go forth with my week. It’s one of those things that you build up for a whole month and then when it’s over, it’s time to just let it go and stop retelling it. 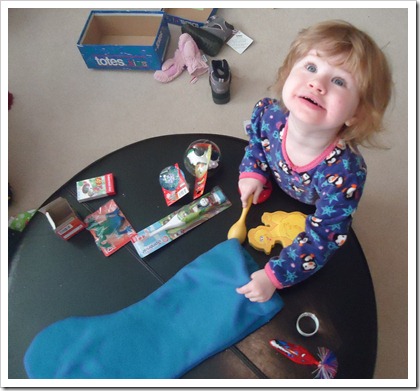 One thing I will share is that this year we got Isabella involved in culling through her toys. Before we even brought one gift from Grandma’s into the house or opened many of her Santa gifts, we had her sit with us in the play room and decide which toys she would keep, which ones would be put away for a while (i.e. take out of the rotation and bring back in 6 months from now when we needed something “new”) and which would be given away to “other kids and babies and ladies and guys” (as she says it).

I thought it would be hard for her to understand and that we’d have to grab toys out of her clutched little hands but it didn’t go that way at all. She was cool with giving some of them away. She even went with us to Goodwill yesterday and watched daddy take the bags of stuff in. She asked where daddy was taking her toys and I reminded her about other kids who needed them. She said, “And babies and ladies and guys.” Yes, them too. 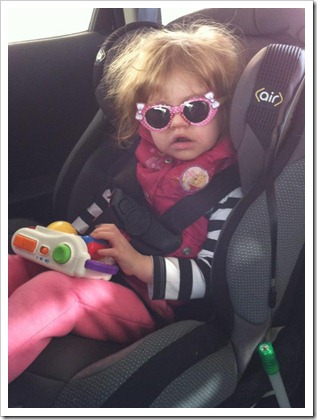 With a herd of toys either gone or relegated to the basement, her playroom had much more room for her new toys, like the kitchen set. It looked so nice and neat and open last night I almost wept. I know it won’t last – especially with my tornado Father-in-law coming over today – but it sure looked good for a day!

Another project that was started today was the basement. That one wasn’t even on my to do list – it was a total accident. See, last week I started working out again. Some of my gear is still packed away, and we don’t have the TV set up in the basement yet, so I’ve been forced to do either the elliptical while reading a magazine or free weight moves (using fitness cards from magazines). Well I finished my magazine this morning before my time was up on the elliptical and I CANNOT use a machine without either reading material or TV to watch. So I had to find other cardio. I looked around the basement – which has basically been the dumping grounds for everything else in the house that we don’t know what to do with – and decided I might as well work on organizing it.

So I moved furniture (including the elliptical which before was tucked back in a dark corner and now is near another wall, under some light), went through boxes, picked up toys, and basically started figuring out where things should go and how to keep it somewhat tidy while still being in limbo.

I got so much done and was moving and using muscles the whole time. Not too exciting but I felt great about it! Plan to do that again tomorrow and every day thereafter until we have a gym membership (which could be sooner rather than later)!

I have a whole slew of other projects to get done but those will have to wait for another day and another post.