This has been harder than I thought. For those of you just tuning in, I decided at the beginning of the month to take part in a 29 day challenge (over the month of February) to get ONE “problem” room in the house organized once and for all.

I picked Isabella’s playroom. It’s the first room you see when you walk in the front door and I want it to look nice. Play rooms by their very nature tend to be dens of insanity. But given the location of ours, it needed to have some order to it.

Here is a before pic. 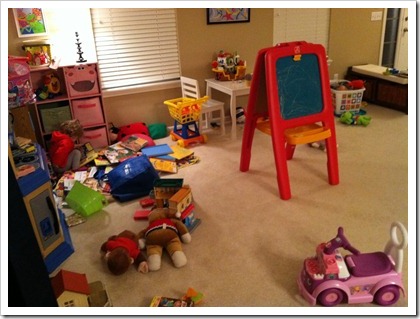 Ok granted, I took that pic on a particularly bad day after she’d been playing hard. Still, it needs help, wouldn’t you agree?

Before I got started, I made a list of goals for this project. You can’t start unless you know what you really want to do, right? It’s too overwhelming otherwise.

Here are my goals:

1. Simplify so that the room looks less cluttered

Seems counterintuitive with a kid’s room. Isabella has a million toys and they’re all small and easily lost. But we’re really trying to keep the junk to a minimum and regularly cull through it to get rid of or put away things she’s not playing with anymore.

Kids are short. Therefore, their stuff is low to the ground. I get that. But it also breaks up the room into 2 distinct halves – the top and bottom. Most rooms have a nice medley of short and tall things so that it’s one unified space. The playroom doesn’t. So I need to figure out how to go “up” while still keeping everything accessible. 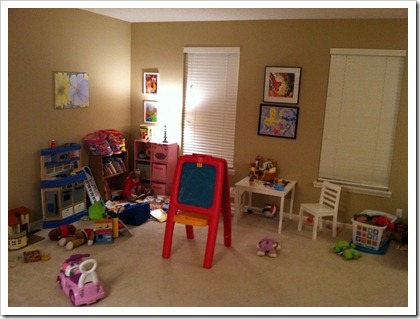 3. Unify color scheme with dining room so that the 2 rooms complement each other

My thought when buying all the pink and green stuff originally was that Isabella is a little girl and should therefore have things in pretty, girly colors. That works ok for her bedroom, which is all hers. But in a room like this, which everyone will see and also has to “share space” with the dining room, we need more visual cohesion. Besides, the toys themselves will keep it plenty colorful.

4. Visually separate the 2 rooms while still allowing for easy movement between them

This seems counter to #3 but it’s not. On the one hand, we want the rooms to work well together because visually, your eye will see them both at the same time. However, we also want to show that they are 2 rooms with different purposes. Another bonus to this is that it keeps Isabella’s stuff corralled so that it doesn’t take over the whole house. 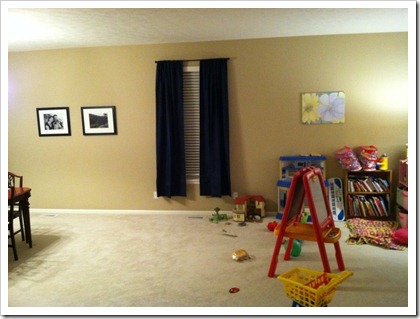 5. Keep costs down – try to use what we have first before buying

This is a biggie. I could go crazy and buy all new furniture to “do it up right”, but who can afford that? So instead I’m going to try and use what we have. If I have to buy something, I’ll look for sale/clearance items. Gotta watch the pennies!

Here’s what I’ve done so far.

I went through everything and made 3 piles: keep, toss, and donate. The keep items were then split in to 2 groups: keep in the playroom or store in the basement for future rotation or the next kid.

Next, the bins had to be changed up, per goal # 3. The green and pink wouldn’t work with a blue/white/gold dining room. I originally thought of painting or dying the bins a different color but decided against it. First of all, the bins are flexible so paint would have ended up cracking and peeling off (even fabric paint). Dye might have worked but I didn’t think the colors would end up looking very “true” since the base color of the bins was green and pink (as opposed to white). So, I bought some new ones on sale at Target for $6 each. I think they look better than doctored up ones would have. Besides, now I can use the green and pink ones in Isabella’s bedroom (which will be an upcoming project). 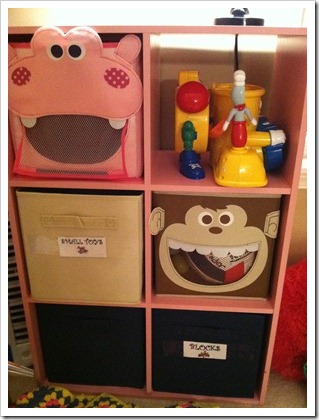 And for fun, here’s the pic Samson photo-bombed. 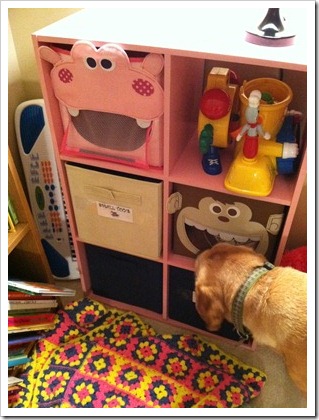 The pink shelf will be moved upstairs into Isabella’s room eventually, when we’re ready to switch things around. The pink hippo bin will go with it.

From there, I looked at what we could do to consolidate the items in the bins. Up until now, they didn’t have a particular purpose other than as “boxes for stuff”. I devoted 2 of them to the Mega Bloks (which allowed us to get rid of the extra bags we had sitting atop the bookshelf) and the other two were split between balls and toys. I added labels so that we’d remember which was which.

To help with goals #1 and 4, we bought an ottoman set. 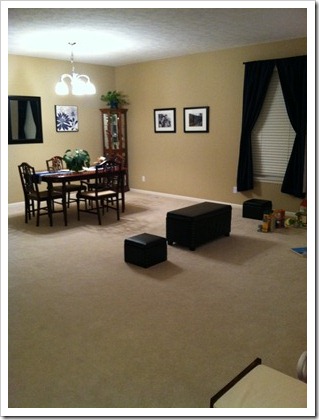 But Sarah, I thought you weren’t going to spend a lot of money? You’ve just mentioned 2 sets of things that you bought! I know, I know, but hear me out. The ottomans were a set of 3, on sale, and I had a coupon, so we were able to get all 3 for $85. If we had bought them at full price, it would have cost us almost $200. PLUS, since the ottomans all double as storage units, we were able to move Isabella’s stuffed animals in to them and get rid of the tupperware toy box (that has now been moved to the basement and repurposed for storage). By adding the 3 ottomans, we have additional seating, storage, a visual separation between the 2 rooms and were able to get rid of another box that just wasn’t working. 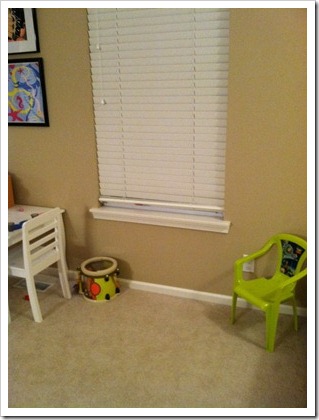 Newly freed up space where the old toy box was. 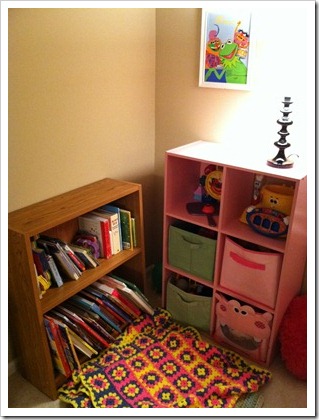 No more big and bulky bags of blocks.

I have several more ideas and projects to do before the room is done. I’m super excited to see how they work and to share them as I go! So far I’m happy with the accomplishments. I’m the kind of person who wants it all done RIGHT NOW! I have to keep telling myself to take baby steps…it’ll all get done eventually.