Today’s the day a giant catastrophic storm is supposed to roar through our area. Jim Cantore from the Weather Channel is even here.

However, so far the storms have been fairly mild. Some rain here. A few thunder claps there. Nothing that would suggest the end of the world. But you never know with Nebraska, it could change in an instant. 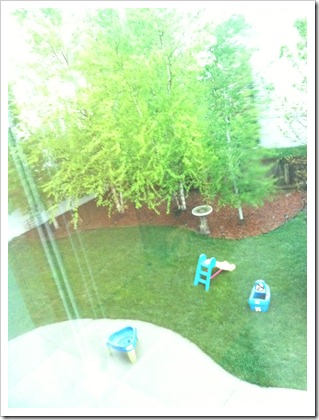 I used the inside time today to be both productive and relax. Isabella and I ran to the store for supplies (like water) and then we lazed around watching TV. We also took a nice long nap. That felt good. There’s nothing better than napping on a stormy day.

Before the nap I got the hall closet organized.

I forgot to take a before picture (oops!) but imagine it was something like this, only inside the closet:

I culled through our towels and sheets, getting rid of ones that were old or mismatched. I kept enough for each of us to have 3 towels each, and 3 sets of sheets (for me and CJ – Isabella’s bedding is stored in her room). I also went through all the toiletries, medicine, and other paraphernalia and organized it. 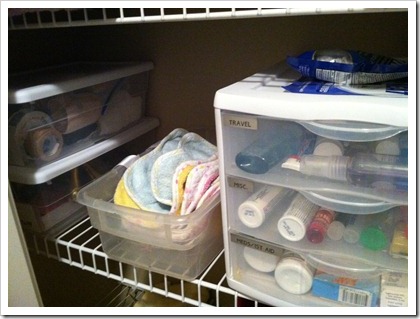 Putting frequently used meds on the turntable works great. It’s handy because everything can be “up front” with a quick turn.

I also corralled all the bulk stuff (big bin on the left) so that I know what I have and what I don’t. 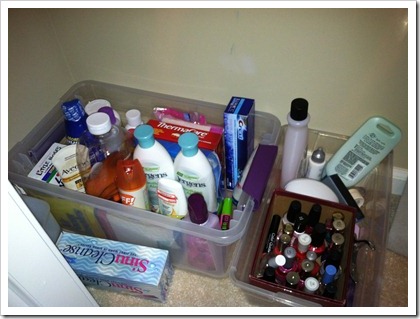 I can’t tell you how many times I’ve run out and bought deodorant or something only to realize later I had an extra one on the floor of the closet. Hate that!

You can see that all my mani/pedi supplies were consolidated as well. Now I can just grab that whole bin and take it with me when I want to paint my nail, instead of searching for everything I need.

Feels good to check that project off the list.

Now to some random odds and ends from the week that I have been meaning to blog about but never got around to.

I love fresh flowers. I used to think they were an occasional treat but now I try and have them around the house all the time. Nothing brightens up a room better.

I bought a bouquet on sale for $5 the other day and split it up. This vase is sitting in our dining room.

And these little beauties went up in to Isabella’s room! 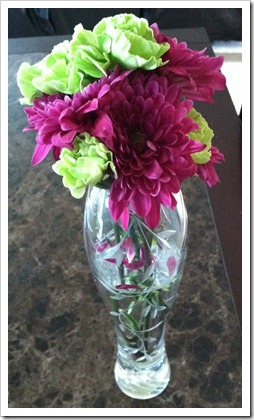 Funny how something so simple can make a big difference.

Remember how I told you about our puzzles at work?

Well we finished another one!

As you can see this was a 3-D one. I found it at a used toy store for $3 and thought, what the heck? 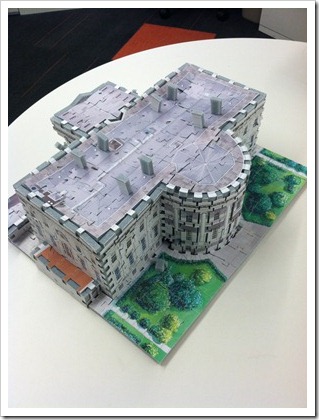 To be honest, I only put like 5 of the pieces together. I was too busy to help much this time around but the other gals did a bang up job!

We’ve already taken this one down and started puzzle #3. It’s a landscape scene with lots of water and sky. We’re about halfway done so far. I’ll share when we finish completely.

And now for a story about the Dog “Whisperer”

Samson was taken to the vet last week to have his leg looked at. He’d been limping around for a month or so. They x-rayed and found a sprained knee and really bad arthritis in both hips. He had never limped or shown any signs of the hip pain before. Doc said it’s because he’s so athletic and strong, that he was able to transfer the weight off his hips to his knees. But unfortunately, that’s how his knee got sprained. Anyway, he’s doing fine, just has to be on pain meds for a while. But we’re also supposed to keep him from running or playing too hard.

You tell me how we’re supposed to keep a lab from running?

Anyway, the other day, Samson started feeling his oats and grabbed one of Isabella’s stuffed toys and ran around the playroom with it. I yelled at him to stop and drop it and he ignored me. I yelled again and he just stood there with it in his mouth.

I was obviously having no effect on him.

Isabella calmly walked over to Samson, stood about a foot in front of his face and screamed, “DROP IT!!!!” at the top of her lungs.

Samson promptly opened his jaws and released his prisoner.

Isabella picked it up and brought it to me saying, “Here you go mommy. I got it back for you.”

Here’s hoping the big storm goes around us! Stay safe!