My baby is half a year old. 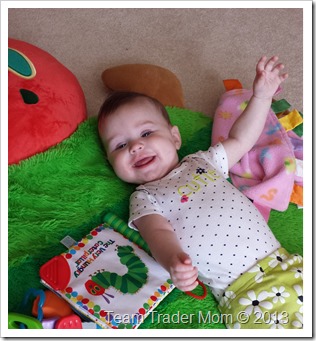 How could this have happened? Who is responsible for the time going by so quickly? I want names!

I guess I just have to accept it. My girls are going to keep growing up and there ain’t nothin’ I can do about it.

In terms of milestones and progressions, not a whole lot has happened since last month.  Cora continues to observe everything and especially watches her big sister very closely.

Poor thing got another ear infection last week, this time in both ears. It’s her second one in a month. One or 2 more and we’ll probably have to start talking about tubes. This is all new territory for us as Isabella didn’t have an ear infection until just this year.  Cora wasn’t showing any typical signs of it either – no ear tugging or fussiness or loss of appetite. We only figured it out because she was getting a lot of mucus in her eyes.

Yesterday she broke out in a rash. Started in her diaper area so I thought it was just diaper rash. By mid afternoon it had spread all over. Lucky for us we were already going to the doctor for her well check appointment. Turns our she is allergic to Penacillin and thus broke out in hives. Both CJ and I are allergic so it only makes sense that one of the girls would be. Poor Cora seems to be getting the lion’s share of the bad genes!

She doesn’t seem bothered by any of it though so that’s a blessing. 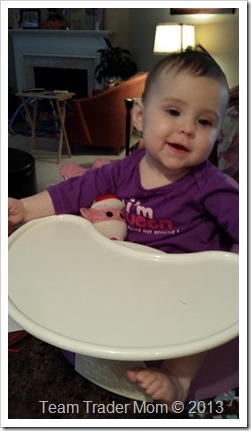 Here is the report from her well check visit!

She is 13 pounds 15 ounces and 28″ tall. She’s average on height but tiny for weight. We got the go ahead to start baby foods (though she’s been on cereal for a month or so already). She’s also been approved to move to a convertible car seat whenever we’re ready. That’s what Isabella is in now. So when we move Cora up, we’ll upgrade Isabella to a booster and be DONE with the infant car seat altogether! Hip hip hurray!

(As a side note, Isabella also had her well check visit yesterday and passed with flying colors. The only thing was that we discovered she has ringworm. I had noticed a little circular shaped red spot on her chest and it wouldn’t go away with Hydrocortisone cream. Now we know why. Doctor said some times kids get it from cats. We don’t have any cats. However we do have cats that roam the neighborhood so doc suspects one of them may have pooped, got some of the feces on it’s fur or in it’s paws and then carried it in to Isabella’s sandbox. Could also have been from pre-school if another kid was infected and didn’t tell the school so who knows.)

As for me, well, I’m almost  back to my pre-pregnancy weight! I can wear most of my old clothes now which feels great.

I had a fun discovery today. First, take a little walk with me down memory lane. Remember when I fainted at The Annex 3 years ago? Well one thing I never shared was that when I fainted, my bowels relaxed and emptied themselves. Yes, I pooped my pants. I didn’t realize it until I was in the ambulance. The EMT told me that was totally normal but still I was mortified. So when I got to the hospital, they gave me some scrubs to wear. And they were Men’s Size Large. I obviously had to wear them home and have kept them all these years because, well, they’re darn comfortable. But they’re huge on me.

When I went to the hospital to have Cora, I took them along to wear after giving birth. I was horrified to discover the day after delivery that they did not fit. They were too small. Men’s size large scrubs were too small for my post-baby body.

I took them out today and take a look! 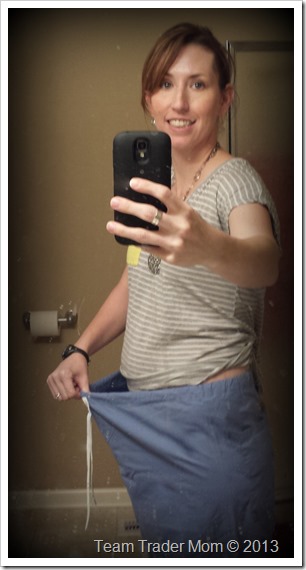 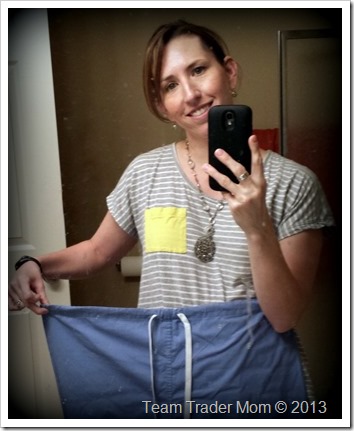 I still have another 7 pounds to go to hit my goal weight. And the kicker? I actually believe I can do it! In years past I’ve tried and failed to lose that little bit of weight and told myself it just wasn’t possible. Now I know that it is. I CAN do it and I WILL do it.

What can I say – life is good.

Want to read more? Check out these!