I’ve been going to the gym now for about 2 weeks. Before that it had been over 4 years. I had forgotten how much of a subculture there is. Someone should seriously come up with a new sitcom that takes place at a gym. I’ve been studying this little underworld and certain “characters” in particular. Here are the different groups I’ve identified, as well as some specific examples from my gym.

Muscle heads. We all know about these guys. The ones who spend hours in the weight room lifting the heaviest possible weights they can manage. They grunt and make noises so that everyone knows how hard they’re working. Then they drop the weights with a dramatic thud. Most of them wear cut off t-shirts to show off their bulging biceps. They can often be spotted with a Gatorade or protein drink in hand. Some of them truly are cut and buff. Others are wannabes who just like hanging with the big guys. 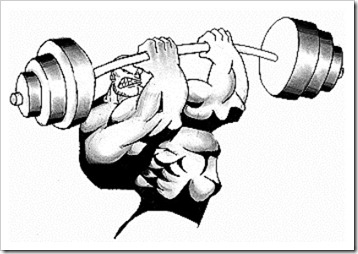 Tweedle Dee and Tweedle Dum. These 2 are either brothers or best friends. They’re both short and stocky. One has a shaved head and one has longish hair pulled in to a ponytail. They are both covered with tattoos.  Every day they follow each other from machine to machine, taking turns doing reps. I’m pretty sure they read up on this stuff too because they’re very enthusiastic and always talk about new moves to try. Neither one is super cut so they fall more in the wannabe group.

Geriatrics. These are the retired set that come in to socialize more than sweat. The guys gather together to talk about the latest news. The women gossip. In general they move slowly on the cardio machines and lift lighter weights, but at least they’re moving.

The Godfather. This is a guy that seems to be the unspoken mayor of the group. He is probably in his late early 60’s and has black hair (most likely dyed). It’s long and he keeps it slicked back in a ponytail (what’s with guys and ponytails at my gym?). He’s darker complected, Italian looking, and short to average height. Despite being at the gym every day, has a gut. He always wears a black t-shirt with black sweatpants. His routine is to start out lifting weights, in particular the pulley machine. Then he moves to the recumbent bike where he “holds court” as I call it. Literally, he sits on the bike and watches the rest of the room. All the older gentlemen there stop by and visit him, either on their way in or out. He seems to be dispensing advice to them. Or else collecting payment.

Aerobics-aholics. These are the women who come strictly for the classes. Whether it be step aerobics, spinning, or Pilates, all they care about is group fitness. They wouldn’t dare use solo cardio equipment or weights, most likely because they find them boring. 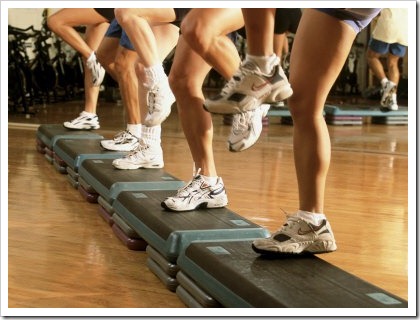 The Jans. There are 2 ladies who I call Jan and Jan. I don’t know their real names but they look like “Jans”. They are in class every day on time and always leave just a few minutes early, I imagine because they have to get off to work. The teachers all know them. They both have short dark hair. One is tall and skinny, the other is short and has a few  pounds to lose. They work hard too. I’ve never seen them quit a set of reps early or ease off the cardio. They want to work.

Iron (wo)men. These are the people in tip top shape that are serious about working out because they are probably training for something. They wear the latest in high tech microfiber sweat wicking clothes and shoes. They are not there to socialize, they’re there to get the job done.

Marathoners. There is a man and women who actually run to the gym every morning and then run some more once they get there. After their time on the treadmill, they go over and lift weights. They’re both thin in a fit, not a skinny way but not super buff either. I have no idea if they are married or just friends but they are together every day.

Routine Warriors. This group of people has a set thing that they do every single day without exception. They never vary their workout because they know what works for them. You can set your watch by these people

The Scowler. I don’t think this lady is really mad I think she’s just so in to her routine that she has her “don’t mess with me” face on all the time. Here is her routine: she starts off on the elliptical machine and does that for 30 minutes at a fast pace. Then she moves to the weight machines and systematically works her way through them. She’s in and out of there in 55 minutes flat every single day and never utters a word to anyone.

There are also some people who don’t really fall in to any one category, but they’re interesting to watch. There is the married couple that come and do their routine together. I’m pretty sure it was his idea to go so early in the morning because he’s always full of energy while she just looks pissed off. She always quits earlier than him and seems to be half-assing everything. He gets annoyed by it too. One day she stopped, went in to the locker room for her stuff and walked out to the car – all while he was still pedaling away on the bike. He just rolled his eyes and kept going. I guess he figured he would make her sit and wait for him.

Then there is the flirt lady. I think she wants to be a body builder because I see her lifting a lot and hanging with that crowd. Her body doesn’t quite reflect it though. She flirts all the time too. One day she was talking to one of the guys and batting her eyelashes at him. The whole time he was staring at her hot blonde friend. I felt kind of bad for her.

Then there’s the Man in Black. This is a guy about my age who falls in the Routine Warriors category except that he’s not quite as regimented. Everyday he wears a black t-shirt and black running pants (maybe he takes fashion tips from The Godfather). He starts out with a 10 min. warmup on the treadmill and then lifts weights. He always looks super tired though, like he’s one rep away from a nap.

And then there’s me. I’m not sure what category I fall in. I do some classes but also do my own thing. I try to vary my routine every day to challenge my body but yet I’m not as hard core as some. Who knows. Maybe I’m in a whole other category I don’t know about because I’m in the middle of it.

I tell ya, if you like to people watch, join a gym. There is no shortage of people and personalities!

It’s been 3 weeks since I last worked out. That’s way too long for me. I hate missing a couple days much less 3 weeks! I had good excuses though…really!

First, I was sick with a cold. I usually try to work out anyway when I’m sick but this cold was too much. Then I got a concussion. Funny enough, they sort of frown upon working out when you have a head injury. Wonder why…? Anyway, it actually took 2 weeks to get over that so there you go.

Last night, as I was setting the alarm clock, I was bound and determined to get back at it and work out the next morning. Oddly, when my alarm went off at 5:15 a.m., I was ready. I didn’t even think about not getting up or hitting snooze. I literally bounded out of bed (mostly because I didn’t want my alarm to wake the baby) and got to it.

Boy did it feel good. There is just no substitute for sweating and tiring out your  muscles. I felt really great afterwards and have had so much more energy today than I had the last 2 weeks combined! Ha! I’ll probably sleep better tonight too.

Exercise has always invigorated me and that’s why I try not to stray too far from it. Even if I can only get in 30 minutes, I try to do something. Tomorrow will be a challenge because I have to drop Samson off at Doggie Day Care around 7:30 a.m. which means I’d have to get up at 5 or before if I want to get my workout in. I can do it though! Consistency is key!