I mentioned in my wrap up of May goals that we had snuck away for a 3 day vacay to Kansas City over the Memorial Day weekend. I love holiday weekends, particularly when I can stretch it out even longer by taking a couple extra days off!

It was a much different trip than the one we took around this time last year, when we drove to Michigan to visit family and then made an extended road trip out of it.

It’s amazing to me how much less stuff Isabella needed than she did only a year ago. She’s sleeping in a big girl bed so we didn’t need a Pack-n-play. She can eat out of a high chair or booster seat so no travel seat necessary. We broke her of the pacifier habit so there was no time spent frantically searching for dropped oobies. She needs less stuff in general so we could get by with a smaller diaper bag and stroller, instead of the honking massive one we used before, and we didn’t need to dedicate a whole suitcase to “entertainment items”. We simply packed our travel DVD player, some new movies and few new coloring books.

It was nice to NOT have a car this full… 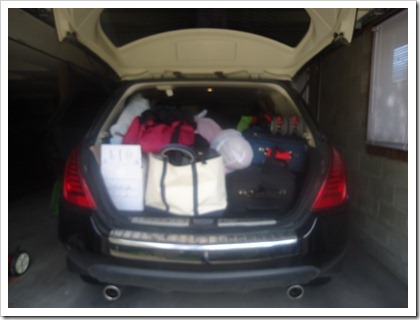 …and instead we had only about 1/3 of that amount of stuff. Helps with gas mileage too!

We hit the road at 9 a.m. Thursday morning (after dropping Samson off at my parent’s house) and arrived in KC around 12:45 p.m. (with only one stop for potty breaks and snacks). We drove straight to Country Club Plaza where we wandered around until we found a good lunch spot.

Along our wanders we found this boar statue. 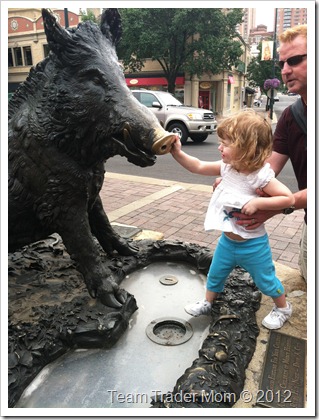 Legend has it that rubbing its nose is good luck so Isabella was all over that. We also found this other fountain. 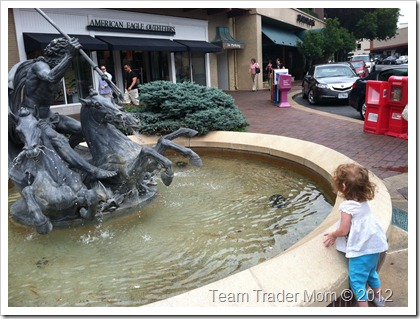 Finally we decided on a lunch spot – Classic Cup Sidewalk Café. It wasn’t exactly kid friendly – as in no kids menu – though they did at least have high chairs so I guess that’s something.

I ordered the mac n’cheese (like, duh) and CJ got a bison burger. We split these with Isabella. All the food was great and after chilling for a bit, we headed out again to explore. However, it was a very hot day and Isabella was refusing to ride in the stroller, yet she was obviously tired. Anyone who has kids can do the math on that one.

She literally threw such a fit in one of the toy stores when I told her we had to change her poopy diaper that the clerk let us use the employee restroom in the very depths of the storeroom – far away from paying customers that might be bothered by screaming toddlers. Then again, if they’re in a toy store, they’re probably used to screaming kids.

Due to that, we didn’t wander around for very long. We decided to cut it short and just head to the hotel. Not before buying Munchkin this cute little yellow hat though, which she was totally working by the way. 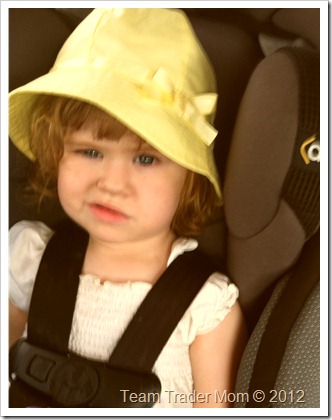 We checked in to our hotel, the Drury Inn which we LOVE because they have an awesome free hot breakfast every morning AND free happy hour every evening, which includes hot food. We totally made that our dinner Thursday night. They had hot dogs, chicken tenders, nachos, soup, salad, and a baked potato bar. Done and done.

Isabella had a lot of fun pulling her own suitcase and pushing the elevator buttons. That became the fun game of the whole trip. 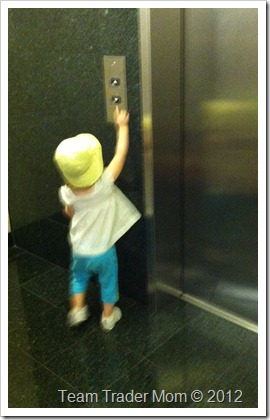 Our room was a suite which meant CJ and I had a bedroom that was separated from the living space, where we had Isabella sleep on the fold out couch. Worked beautifully! 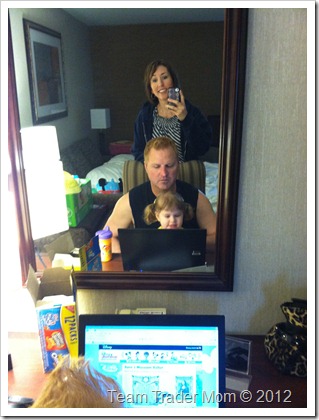 Friday was LEGOland day! I had purchased our tickets ahead of time online (which I strongly encourage you to do should you ever decide to visit. They were nearly $10 cheaper per ticket and we were able to jump to the front of the line) and our scheduled entrance time was 11 a.m. We got there a bit early but they let us right in.

After being admitted, you wait in line as they send up groups of 10 or so at a time. While you wait there are these cool girl and boy statues made all out of LEGOS! Isabella thought they were pretty awesome.

The first area to visit is a room with 4 or 5 activities for the kids and everyone gets a free commemorative Lego piece. You exit there and head to the “Kingdom’s Quest” which is actually a ride during which you shoot LEGO zombies with laser guns!

Cool, right? We thought so. Isabella, not so much. To be honest, we had no idea what we were getting ourselves in to. We were just standing in this line, a girl told us to get in the next car and off we went! Munchkin covered her ears the whole time while CJ and I killed some zombies.

She was so traumatized that she whimpered the whole time we were in the miniatures room, which was super freakin’ awesome! They basically used LEGOs to build many of Kansas City’s cityscape and monuments, including downtown: 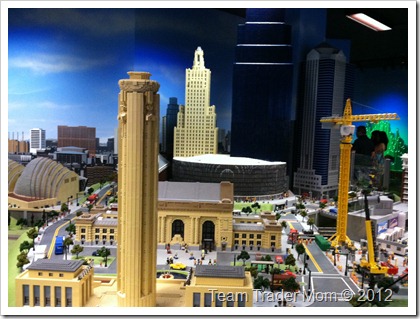 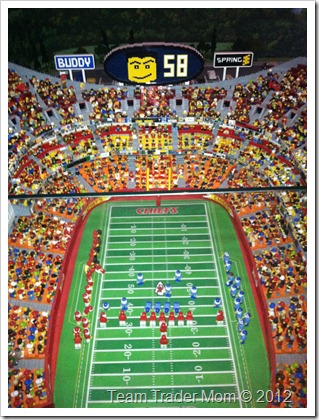 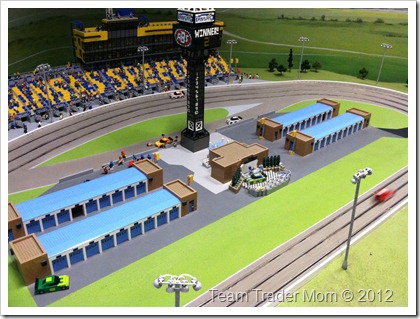 And even scenes from the Wizard of Oz! 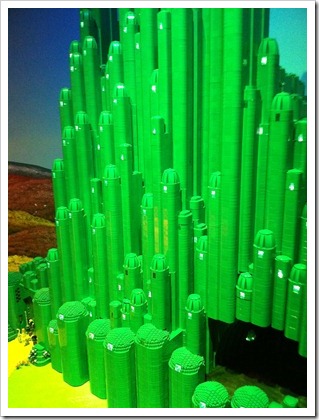 (all the scenes are lighted too and every 5 minutes or so they dim the lights so you can see the buildings all lit up!)

No need to worry about Isabella, the next stop on our tour was a big area dedicated to fun and playtime for kids – including these –

A pit of giant foamy LEGO blocks. Isabella got to work building a tower that was taller than she is! 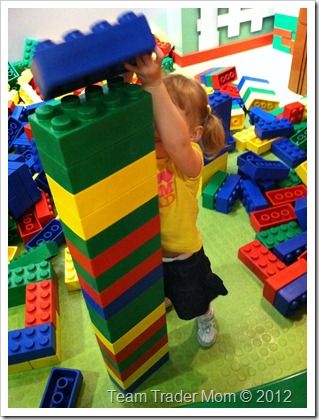 She was mighty proud of it too, until some reckless little punk knocked it down and told her she shouldn’t build things so big. I was about to give him a piece of my mind when I realized that picking a fight with a 6 year old probably wasn’t in the spirit of LEGOland, so we moved on…

We stayed there for a while, making things and eating lunch, and then wandered to the cupcake building factory (there was also a race track area. Kid you not; it was filled with dads and their sons building cars while the moms/wives stood around looking bored). 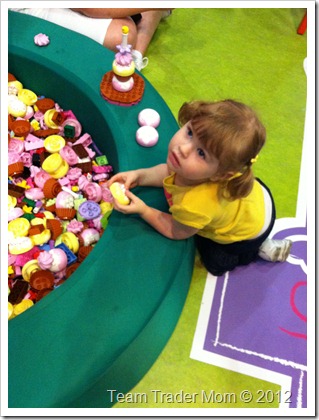 After a few minutes there, we exited and did some shopping in the LEGO store.

Next stop: Sea Life Aquarium – which happened to be adjacent to LEGOland. Again, because we had purchased tix online, we walked right in, past the line of about 50 people. So long suckas!

Now, being as how we’re from Omaha, home to the *cough cough* #1 zoo in America *cough cough*, with an awesome aquarium, we weren’t expecting much. The Sea Life Aquarium is not as big as ours but it is nice and we enjoyed it. Definitely worth a visit. Isabella had a partial meltdown at the beginning but we were able to get her through it.

Seeing daddy in this bubble helped. 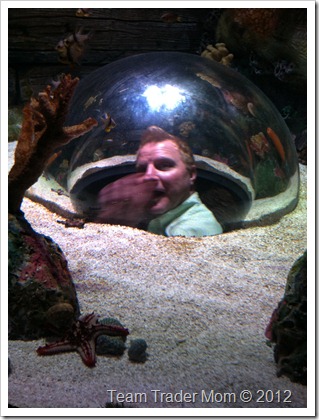 As did this tunnel.

We had to leave in a hurry as she started screaming again when I reprimanded her for throwing sand out of a sandbox they had. We were free and clear until I realized we had left the stroller inside. CJ went in and found it all the way back at the bubble. At least we got it!

Isabella was asleep before we even pulled the car out of the spot.

She’ll thank me for that picture one day.

Once back at the hotel, CJ stayed in the car with her and snoozed while I went inside and crashed in the bed. After we all awoke, we snuggled up and watched “Despicable Me” which was on HBO. Turned out to be a really cute movie.

Then we ventured out for some good ole KC BBQ, which we found at Fiorella’s Jack Stack Barbecue.

Isabella was getting antsy while we waited for our food to come out, so in desperation I downloaded a free app to my phone called Doodle Buddy.

It’s an app that allows you to paint/draw on varied backgrounds or pictures. They have stamps too, which are silly and make sounds. That little app kept her entertained for quite a while (and still does).

We stayed in that night and watched “The Lion King”, which I had purchased for the trip and she loved it, and then hit the sack. We were all beat from a long day.

Saturday was our last day there and as such we checked out of the hotel and headed to the Powell Botanical Gardens for the “Fairy Houses and Forts” exhibition.

I have been to my fair share of Botanical Gardens. We have a decent one in Omaha, I spent many a day in the New York one when I lived there, and CJ and I visited the Missouri gardens in St. Louis many years ago. All are gorgeous. You really can’t go wrong with being outside surrounded by beautiful landscaping. Of those 3, New York takes the cake as it’s freakin’ huge and awesome.

But I think the Powell Gardens might be my new favorite. It was well laid out, with fun and surprising things around every corner, and the Fairy Houses and Forts were uber cool. I know those aren’t a permanent fixture but they sure made us happy! 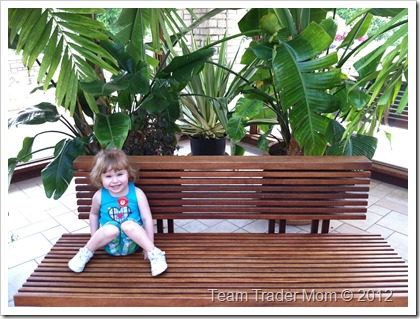 It was a hot day so we kept our visit to about 2 hours. That was plenty of time to walk around and see each of the Fairy Houses and Forts.

They were all so different and unique. 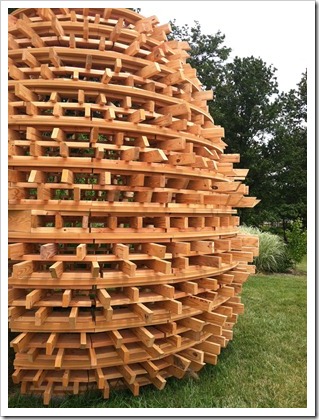 Some were just plain cool. 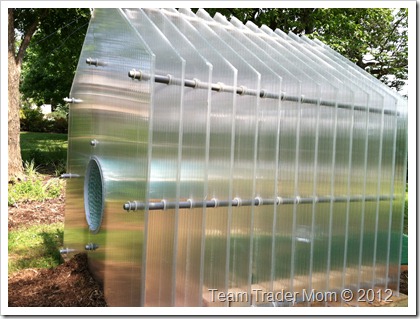 After seeing them all, we headed inside to grab some lunch. The cafeteria there was really nice. It had simple food (burgers and sandwiches) but they were all prepared to order with fresh garden ingredients. Definitely hit the spot after a couple hours of walking and sweating!

From there we hit the road back home.

The best part about a 3 day trip at the beginning of a long holiday weekend? We still had 2 days left to relax once we got home!

Sunday was spent at the beach…. 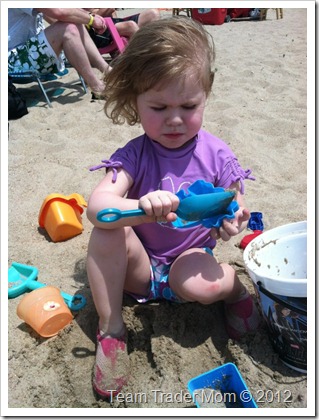 …and Memorial Day was spent chilling with family at our place. 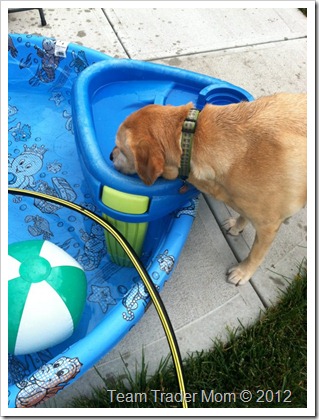 What a great start to the summer! Here’s to many more adventures to come in the months ahead!