I know it’s only Thursday, but technically it’s my Friday so Annexed is getting moved up. I actually didn’t spend much time here this week. I was out at the west office Monday, Tuesday and Wednesday morning. I discovered that having two desks isn’t all it’s cracked up to be, when you only have enough supplies for one. For example, I was granted a laptop when I got assigned to this Mall project because I would need to be portable and roam from meeting to meeting.  So, I got it, and all the paraphernalia that goes with it, while at The Mall. Consequently, my west office doesn’t have a docking station. Also, someone stole the hands free headset for my phone out there. So all week I was calling in to conferences and had to cradle my handset against my shoulder so I could type. Ugh! Maybe it was my chiropractor who stole it because I sure  need to see him now! I also hate shuffling files back and forth. Soooooo…for that reason I am preferring to work at The Mall until I can move back out west permanently.

Who knew The Mall would be the office of choice?

Because I wasn’t here much, I don’t have anything to report so I thought I’d do a run down comparison of the two.

So, here it is, the head to head battle of East vs. West, Old vs. New, Dark vs. Light, Moldy vs. Unmoldy.

Is this corner we have long time fighter and veteran, The Mall! And in this corner, the new young champion, The West Office!

Bathrooms:
The West office has automatic EVERYTHING in their bathrooms – toilets, sinks, soap dispenser, and paper towels. The only thing not automatic are the doors. I  kind of wish they were. It would prevent me from having to use an extra paper towel to open them and then toss it back to the trash just as someone else is walking in, thereby hitting them in the face with a used towel. It’s embarrassing. Anyway, they clean the bathrooms there like 800 times a day. Seriously, it seems like every time I go for a potty break, they’re being cleaned. Don’t get me wrong, I love me a clean bathroom. I just don’t love sharing my “private time” with the Mexican cleaning ladies.

The Mall has tried to make updates and automate everything, it just doesn’t always work. Only one of the soap dispensers works, and it’s on the sink that has cold water (you can’t adjust the water temp here). So I find myself going to the hot water sink and then reaching across to use the soap dispenser on the cold water sink. If there’s another person washing their hands at the same time, it gets awkward. The paper towels don’t always dispense either and have gotten stuck on several occasions. Thank goodness one of the Texans knows how to fix it. Otherwise we’d all be walking around with wet hands. The cleanliness of these bathrooms is questionable. The cleaning ladies are in here probably once a day, which is better than nothing. Thank goodness too or who knows how long I would have laid on the floor. Also, let’s not forget stall #1. Weird things go on in there.

So I took a risk and picked it up. It’s fudge, I think. Some kind of chocolate and orange fudge. It was either the 10th one made or a number 10 for taste, not sure which. Generally, not something one would expect to find on the floor of the bathroom! Look how close it is to the toilet! How did it get there? Did it fall out of someone’s pocket? Which begs the question, why would you carry #10 orange/chocolate fudge in  your pocket? I left it in there, though moved it off the floor. When I went back in later, it was still there so I just threw it away.

The kitchen here at The Mall wins in the size category. It’s probably 2-3 times the size of the one out west. It literally  has 4 refrigerators in it! I haven’t quite figured out why though. There aren’t that many people in the Annex. Oh well, it means that my food doesn’t have to fight for space with someone else’s so that’s cool. There’s a TV in this kitchen too, but it’s never on. There are also 3 microwaves, which is nice for the lunch rush. I have yet to wait in line for a microwave to become available. There was no hand soap when we first got here but The Strangler took care of that in a hurry and we have some now. There are also no paper plates here, which I find odd. There’s also 3 vending machines in there – one for food and 2 for beverages. Oh, and as an added bonus – this kitchen has a helium tank that you can use to blow up balloons!

The kitchen at the West Office is smaller and more compact. Only one ‘fridge and one microwave. They do have plenty of paper goods though and the color scheme/vibe of it is nicer. Never thought I’d say this but…

Winner: The Mall – any kitchen capable of blowing up balloons wins in my book!

Desks:
You’ve all seen what my desk looks like here at The Mall. It’s  your basic cubicle  – square-shaped, 3 walls, some cubby things, etc. Nothing to write home about. But, it’s a pretty decent size and I have privacy. I don’t have any drawers though. There are supposed to be some but they were missing when I got here. The colors are your basic brown and grey. Nothing fun and exciting.

My desk at the West office is in a pod so there are only 2 walls – it’s like a regular cubicle cut in half from corner to corner. We have nice tall closets for our coats and to keep stuff in. I also have drawers there. There isn’t as much privacy and being in a pod lends itself to more conversation and collaboration. It’s definitely more modern.

Winner: it’s a tie. I like the size of The Mall desk but the collaboration of the West Office set up.

Location:
Believe it or not, I live about halfway between the 2 offices so it’s about the same distance for me to drive to either one. However, getting to the West Office is all interstate and to The Mall is all back roads. The West Office is in a more central hub of the city and you can find just about anything within a 5-10 minute drive and most stuff is even closer than that. Makes it really easy to run errands over lunch or after work. Also provides a whole host of eat out options!

The Mall on the other hand is sort of secluded. It makes it worse that I know squat about this area. No errands get run while I’m here and we always eat here. And let us not forget, that the office is located inside a mall! I mean, while it has its charms and I’ve grown sort of fond of it (in a “feel sorry for the strange old man next door sorta way”), it is what it is and there’s  no denying the crapiness of it all.

Winner: hands down, The West Office.

People:
The West Office is where all my technology peeps are, and more specifically, the other BA’s that I work with. I have a lot of friends there and enjoy our chats, lunches, and work together.

The Mall has operational people here, of whom I know very little. I’ve met many more of them being here but they treat our little team as outsiders. However, our team is awesome. Between The Brit (aka, The Strangler), Bob, the Texans and the Indians, we have a lot of fun. Our group is starting to break up though. Bob moved his stuff back to the West Office yesterday and The Brit will be splitting her time, probably spending most of it out west, when she gets back from vacation. The Indians have started leaving too so I imagine the days won’t be as much fun anymore. Makes me kind of sad really.

We also can’t forget the other cast of characters at The Mall – Scooter, John, the mall walkers, and other random visitors here. That’s definitely something the West office doesn’t have.

Well, I think the West Office is the overall winner, by a small margin. It’s funny to say that now. 2 months ago when I moved down to The Mall, I would have made the West Office the clear winner by A LOT! But, I’ve grown fond of this sad little place and am glad for the experience here.

Annex will probably be on a break next week since I’m only working 2 days, unless something very noteworthy happens that I have to share with ya’ll! 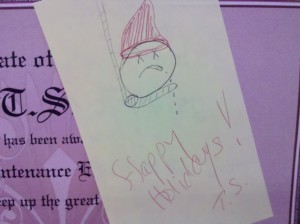 A holiday greeting from The Strangler

3 thoughts on “Annexed: Head to Head”