Samson loves to go for walks. It’s his chance to get out in the world and pee all over it.

Today we went for our first morning walk/run of the new year. The weather was perfect – 50 degrees – and the air was crisp. My iPod was strapped to my arm and we were ready to go!

Then we started walking and I forgot how bad Samson is at this. At first. He gets better the more we do it but today was a struggle.

Let’s back up. When we first got Samson he was a wild buck, full of energy and independence. He’s also freakishly strong. The first time I tried to walk him, I was using a regular old run of the mill leash. He took one look at it and scoffed. Silly human thinks she can control me with that flimsy thing? I’ll show her!

I got dragged all over the neighborhood. I was in tears by the time we got back home.

The vet suggested we try a choke chain. Basically, a choke chain is loose around their neck, but tightens if they try to pull, giving the feeling of being choked for a second. It doesn’t hurt them, it’s just meant to stop them from the pulling. Not Samson! He pulled anyway until he was out of breath. Then he’d stop, take a deep breath and keep pulling!

Again, I was dragged all over the neighborhood and in tears by the time I got back home.

Next on the list to try was a prong collar. It looks like a torture device with metal prongs (that are dull on the end so as not to puncture the dog’s skin). Again, it’s meant to poke at them to stop the pulling. Didn’t phase Samson what-so-ever. He would come back from walks with marks dug in to his neck. And I would be in tears.

Someone suggested a body harness. Basically it goes across his chest. That was the biggest mistake because guess where all his power comes from? Yeah. He really yanked me good then!

As a last resort, we tried the Gentle Leader, which goes around his snout, and then attaches to a collar on his neck.

The idea is that if he pulls, it will pull his head back and to the side. Also, the leader is on his nose which has the least amount of power. It worked. Or would have if we could get him to walk. As soon as we put it on, he dropped down on the ground and started thrashing about like he was having a seizure or something!  He would not get up. for. anything. I finally gave up and just took him inside. We kept trying and eventually he submitted.

He makes you work to get it on him though. You have to chase him around the house. The only way to do it is make him go to his kennel, and then he’s cornered. Then he licks it obsessively. That’s his way of showing dominance over the Gentle Leader. “You may make me obey while you’re on, but dammit I’m gonna lick the crap out of you before and after!”

Like I said before, Samson is freakishly strong. He’s 90 lbs of solid muscle. So he can still yank me around if he gets enough momentum and drive.

And the first walk of the season sucks the most because he’s forgotten all his training. He pulls. He stops suddenly to sniff or pee or both. He lurches. He scratches at his nose to try and get the leader off. And he does “The Seal”.

This is a maneuver that he does a lot. Not sure if he’s trying to get the leash off or wipe his scent on the ground or what. What he does is dip his nose down to the grass and then push off his front paws, like he’s diving in to the water. He ends up sliding across the grass and then he rolls from side to side before pushing off again. It really does look like a seal swimming.

One thing he doesn’t do on walks is poop. He has a hang up about it. I think it’s a commandment in his little doggie world – ‘Thou Shall Not Poop in Thy Neighbor’s Yard”. Our neighbors appreciate that and so do I! Means I don’t have to pick it up!

But, today he took a big ole dump right in the middle of someone’s lawn, and of course I didn’t have a baggie on me. Cardinal sin, I know. I feel bad. He doesn’t leave small piles either…oh well.

So here’s hoping that he gets better as the season progresses and he gets more practice in. He and I both need to get back in running shape so the weekly runs ought to do us good! 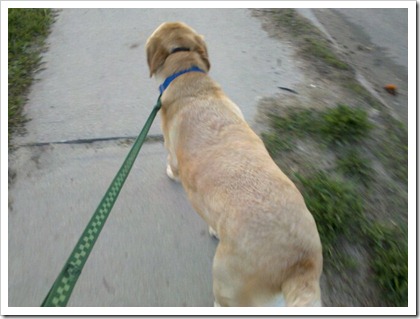