For anyone out there who has a Labrador, or any other high energy dog, listen up. We went through hell and back trying to get Samson trained and under control so if anyone can learn from our mistakes adventures, it will have been worth it. As one of our trainers told us, “All this work is great training for parenting so you guys should be the best parents in the world!”

These pics were taken on the day we met Samson. As soon as we saw that fuzzy little pup rolling around in the grass, we were hooked. 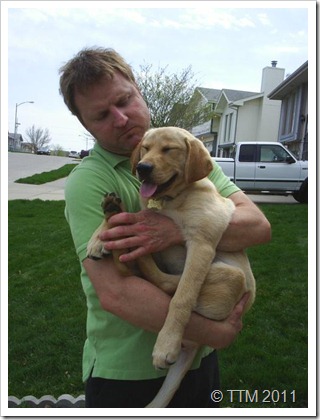 He was a cute little guy, huh?

[Quick aside: we both thought from the day we met Samson that he had beautiful eyes. Almost like lion eyes. So we wanted to name him after a famous lion. But, nothing really seemed to fit him just right. Finally we settled on Samson, which is not a lion’s name but it works because he is so strong. However, when I went to register him with the AKC, I got an error that I could not register under that name because there were already too many Yellow Labradors named Samson. Uh, ok. So we tacked “Aslan” on to the front, after the lion in “The Lion, the Witch and the Wardrobe”. So his real, official name is Aslan Samson Trader.]

We started Samson out in a puppy class at our local veterinarian’s office. He was really little, maybe 5 or 6 months old. 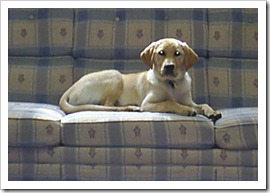 He looks so small there, doesn’t he? Compare that to him today…he’s pretty much doubled in size! Believe me, they don’t stay that little forever!

Samson did well in the first puppy class, so long as we kept him fed up with treats. He’s pretty food-oriented so having a generous supply of goodies in our pockets helped get through the hour. In that class he learned the basics like “sit”, “stay”, “down”, and “come.” But after graduation he was still a crazy, energy filled monster running around the house so we signed up for the next level of class at the Nebraska Humane Society.

We were in for a rude awakening.

See, Samson is very social. He loves people and other dogs. As soon as we walked in to that class, he started jumping and barking and pulling on his leash. He wanted to get to the other dogs and play dammit! Well, this was supposed to be a time of work, not play, so they had to put us at the far end of the room, away from the other dogs. We were the outcasts. Because Samson is so smart, and had already been through one class, he knew a lot of what they were teaching. He got bored really fast. No amount of treats kept his attention – we even brought popcorn which he L-O-V-E-S! He literally spent the whole first class barking, no matter what we did. At one point they even surrounded us with tall plastic movable walls so that he couldn’t see the other dogs. But he still knew they were there and kept up his shenanigans. By the end of that first class, I was in tears. The instructor had us stay after to chat. She recognized that Samson was ahead of the other dogs and a “special case.” She also recognized that I wasn’t being as assertive with him as I needed to be. She promised things would get better and encouraged us to come back.

The other problem we faced is that from the moment Samson entered our house, he saw CJ as the “alpha” and me as the weak one of the litter. Consequently, he wouldn’t obey me at all. CJ kept telling me that I was too gentle on him. Instead of pinning him to the ground when he was naughty, I’d say a weak “No Samson” and then cover him with kisses. I guess that wasn’t the most effective solution.

In the following weeks, we kept going to class and the teacher would have special tricks or commands ready for us to try. While the other dogs were working on “sit” and “stay”, we were teaching Samson to roll over, crawl and “sit pretty”.

But it still wasn’t enough. He would learn the advanced tricks pretty quick and be right back to barking and pulling. We finished that class feeling no further ahead then when we had started. CJ was able to work with him pretty well but I got no where. Out of desperation, I made an appointment with a private trainer. We met her one-on-one, with no other dogs there as distractions. After 5 minutes of working with us she saw the problem: Samson was a smart, high energy dog who had no respect for me. We also weren’t consistant in how we were disciplining him so he was confused. She pulled me aside and asked a tough question: was Samson really the dog for us? She suggested that perhaps it wasn’t a good fit and we should consider giving him up. Even though I was frustrated, and again in tears, I refused to believe that we couldn’t make it work. Besides, I loved him and wouldn’t give up on him. With that decision made, she told us to do the following for one week –

We were to pretend that CJ was on vacation and he wasn’t allowed to do anything with Samson. He couldn’t feed him, play with him, pet him, let him outside – nothing. I had to do everything. The point of this was to get Samson to see me as his master and gain some respect. I even had to feed him by hand (which I ended up loving because his soft tongue and whiskers tickled my hand). We also were told to make him work for everything. If he wanted water, he had to sit first. Need to go outside? Shake first. Time for dinner? Sit, stay and not go eat until we released him. We even put his dog food in a toy dispenser that he had to bat around in order to get the food out. This was so that his brain would get used more and we could tap in to that hunting/work ethic of the Lab.

This sounds pretty extreme but we were at a point of desperation. And you know what? It worked! After just a couple days, he started naturally following me around the house, obeying my commands, and giving me the respect I deserved. Even after that week was over, and CJ’s “vacation” ended, Samson continued to behave better and better for both of us. Using these techniques, combined with visits to Doggie Day Camp twice a week, he really came around.

Today, Samson is the best dog. He is MUCH calmer and can even be trusted alone in the house when we are gone. We still make him work for things and have to find new ways to challenge his brain (and we still do DDC, but have cut it back to bi-weekly) but I couldn’t have asked for a better dog. People that knew him when he was young are amazed to see him now. My parents comment on it every time they come over. He still has his moments of craziness but hey, he is a dog after all. Best of all – he’s really good with Isabella, which was a worry at first. He is big and strong but is gentle with her (for the most part – he does knock her over on occassion when he gets excited) and I can see that he’s protective. He alerts us when she cries and gives her the occasional “kiss” and “nose poke”.

Samson went from being the dog from hell to my best pal because of some hard work, commitment and consistency on our part. I’m so glad I didn’t give up on him.