Have you ever had a dream that was so nice you didn’t want to wake up from it? And when you did wake up, you willed yourself to go back to sleep in hopes that you could pick up right where you left off?

That happened to me the other night. It was a very real dream and it actually made sense (kind of). Nothing like cars flying in the air or serial killers in my house or talking dogs.

Digression: I think it would be so fun if dogs could talk. CJ and I do this thing where we pretend we’re in Samson’s head and we narrate his thoughts. Like the other day Samson was staring at the buffet in our dining room and we went off on a whole tangent of how he was thinking. “Um, guys. Hello. My toys are in there. Maybe you don’t know that but I have toys in there. You should get them and play with me. Or give me food. Hey, do you see me? How about if I stare at you unblinkingly? Would that get you to play with me? Or give me food? Never mind that little hairless one you’re reading to. Play with me. Or give me food.”

Samson’s thoughts probably aren’t near as exciting or funny as we think they would be.

Back to my dream…

The setting: I was at a cabin in the woods with a friend, her crush, his friend and another couple. The crush’s friend was Gerard Butler (you know, the “We are SPARTA!!!!” guy in 300.

Though I personally enjoyed him in Phantom of the Opera as well).

The scenario was that my friend wanted to spend the weekend with her crush and his friends and asked me to tag along. This sounds like the beginning of a bad horror movie but it’s not. It gets good.

Late in the night, after everyone had gone to bed, I awoke and couldn’t fall back to sleep. So I wandered out to watch some TV and Gerard was out there already watching ESPN. He couldn’t sleep either. We had a healthy debate about football (turns out he was a Ravens fan which makes him my sworn enemy) and then started watching a movie.

I got cold at one point and he wrapped a blanket around me. I leaned against him and he put his arm around me.

Did I mention he had his shirt off so that I could see every bulging bicep and rock hard ab?

Anyway, the movie started getting romantic and we were just about to kiss when all of a sudden…

Isabella woke me up with her crying. She wanted juice.

I calmed her down and then frantically tried to go back to sleep.

But alas, I couldn’t recapture the magic.

Guess I’ll have to settle for my own hunky hubbie, who doesn’t take me to cabins in the woods but does get out and fill my car up with gas on really cold days. 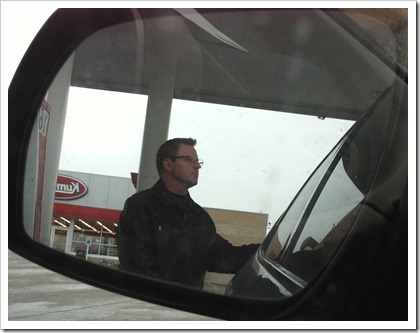 And has bulging biceps.

And is not a Ravens fan.

I’ll take that over the Law Abiding Citizen any day.