Well, it’s the end of the month and therefore the end of the 29 Day Organizational Challenge I participated in (you can recap my progress here, here and here).

I’m really glad I participated in this challenge as it forced me to get moving on a room that I was continuing to put off. It now looks SO much better and I’m really pleased with how it turned out!

What room did I organize?

I chose Isabella’s playroom because it’s the first room you see when you walk in the house and it has a lot of “stuff” so it needs a good system.

Here are the before pictures: 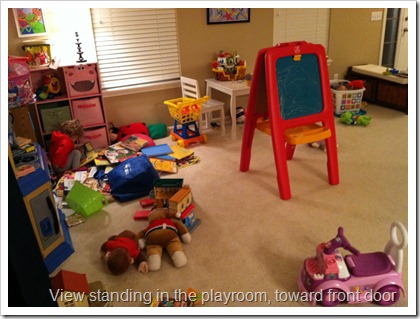 I’ll give you that I took these pics on a particularly messy day but unfortunately, those messy days were becoming more the norm. With no real system in place, cleaning up seemed like such a laborious task. One that I was often too tired to bother with.

My goals with this room were pretty simple. Basically, I wanted to simplify, organize, coordinate with the adjoining dining room, and do it all without breaking the bank. I’d say I achieved all those goals, which feels great!

Here are the steps I took to ensure I completed the space in the 29 day timeframe:

1.  I started out by making a plan of everything I needed to do to get it done, making sure to include my goals. I wanted to set up a course of action that would make sense and be doable. It wasn’t anything complicated. Literally my plan looked like this:

2. Next step was taking inventory of everything in the playroom and decide what to keep and what to purge (either trash or donate). Items that were kept were either relegated to storage (if they were something Isabella had outgrown but we wanted to keep for the next kid) or remained in the playroom.

3. Then I bought some new storage bins and ottomans and figured out a system of what goes where, labeling each one.

4. I also used a shelving unit we had in the basement to reorganize and “pretty up” her books, which also gave us more vertical space to play with.

After that it was a matter of re-evaluating how things were working and make adjustments. One thing that was bothering me were all the medium to large sized toys that were sitting out with no real “home”. I looked around and realized that the buffet we have in the dining room was full of junk and would be a perfect place to hide toys not in use. All I had to do was clean it out!

This picture gives you an idea of how the drawers were being used before. 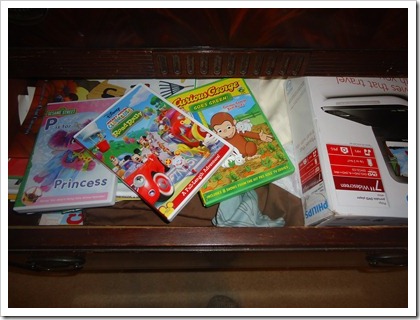 Most had random toys, books, games, tablecloths, etc. in them, with no rhyme or reason. I went through each drawer and got rid of, moved or organized what was in them. Here’s that same drawer after my cleaning.

I was actually able to free up enough space to put several of Isabella’s bulky toys inside the cabinets of the buffet! 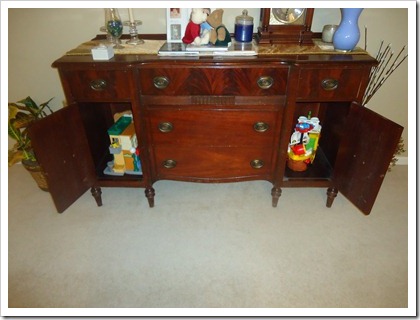 When the doors are closed, you wouldn’t even know there is a Sesame Street house and pirate ship in it!

After putting up some curtains, laying down a rug and finding some decorative items to finish off the room, we were all done!

Now for the big reveal!

Here are the “after” shots of the whole playroom!

I love how it still looks open and airy, yet there is a clear separation between the 2 rooms. It also feels grown up in all the right ways (like with the curtains, valances, rug, canvas bins and ottomans) while also having just the right amount of kid appeal. 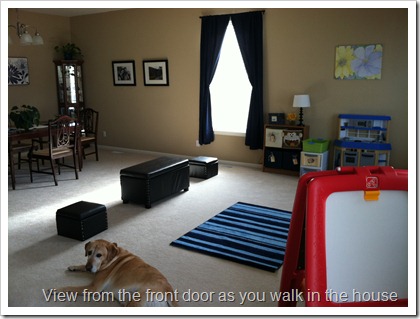 (It’s a good thing Samson coordinates with the color scheme of the room!) 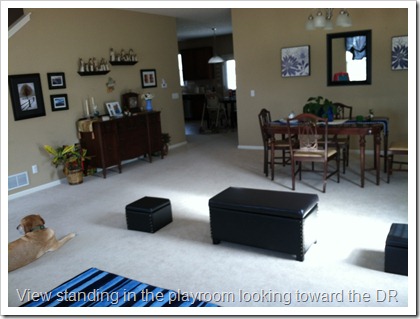 I also love how the dining room remains its own space yet the 2 rooms tie in together nicely (and the buffet hides some toys and coloring books)!

Close up of the bins/containers along with some decorative elements on top of the shelf (frame and flowers from Goodwill, lamp on Clearance at Target)

Finished bookshelf (2 items on top shelf on 80% off clearance at Kohl’s, yellow frame on clearance at Target, blue candle moved from another room). The Muppets paintings were actually done by my grandfather and given to me when I was 3! Such a cherished treasure! 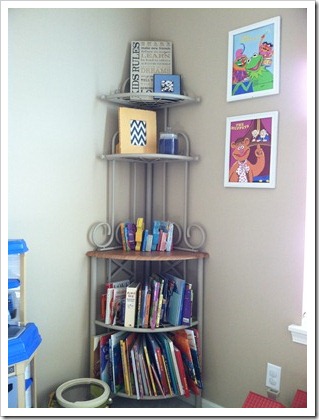 What was the hardest part of the challenge?

Getting started! At first it seemed really overwhelming. I’m the type of person who wants to do it ALL right away but didn’t have the time or energy to knock it out in one afternoon. But once I made my plan and had a good place to start –as well as a vision of upcoming steps – it made it seem much more doable.

One of my proudest moments during the challenge…

…was when I saw my 2-year old daughter using the bins and figuring out where things went. Thanks to the labels having both words and pictures on them, when I told her to help clean up, she knew that her little cars went in the “little toy” bin and her blocks went in the “blue blocks” bin. She also thinks the “secret compartments” in the buffet are super cool. That’s when I knew the effort had been worth it and that this system would work!

If I had to give anyone advice as they begin their organization journey, I would say…

Make a plan and start small. As I said before, getting started is the most daunting part because it’s hard to know what exactly to do and what will work. Take a few days to think about it and write down a plan of action – including what you want to change in the space, what you want to get rid of, what you need to add (e.g. containers or labels) as well as what your final vision is. Also include the baby steps you’ll take to get there. Once you have that, the rest just falls in to place!

There you have it! A finished playroom – organized, tidy and still beautiful!

Next up for me? The kitchen pantry! I already got a head start today by snagging 5 bins from the Goodwill (for $.39 each)! Look out pantry, here I come!