Overall I am feeling much better. The morning sickness is subsiding and I’m getting my energy back. The acid reflux is still very much there but as long as I stick to my meds and eat regularly, it’s not too bad.

One thing I’ve noticed is that this time around I’m not obsessed with all the weekly updates on “here’s how your baby should be developing ” or “here’s how your body is changing”. I pretty much know what’s going on, having done this before, and memorized all those facts the first time around. Also, it just doesn’t really matter to me anymore. So my baby is the size of a fig. While that’s kind of fun to know, at this point all I care about is that it’s healthy. I just want to enjoy the experience, not get obsessed with too much information overload. 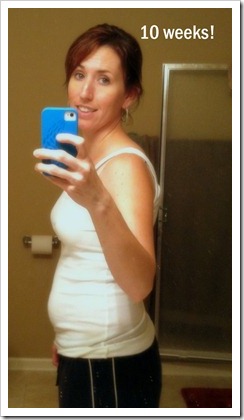 And now this week! 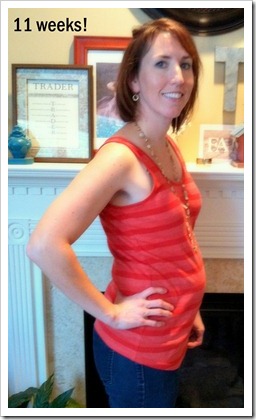 Total weight gained: I decided I am not going to weigh myself at home since I don’t want to obsess over it. I will only know my weight after doctor’s appointments. As of my 10 week appointment I had gained 4 pounds. I think that’s about average at this stage in the game.

I definitely feel bigger than I look. I figured the 11 week pictures would show a huge belly but it’s not too bad.

Food cravings: Apple juice and Pop Tarts. The first one is somewhat healthy (if I buy low sugar juice), the second one, not so much. At least the apple juice craving coincides with the season! I have a feeling our annual trip to Nebraska City to buy apples and cider will be extra fun for me this year!

I fought the Pop Tarts craving for several weeks. I haven’t allowed myself to have Pop Tarts for years because they are nothing but sugar and as soon as I buy a box, I’ll be hooked. But alas, this morning I could resist no longer! I bought a box of Brown Sugar and Cinnamon ones and a box of Chocolate Fudge (none of the fruity ones for me!). They were soooo good. I ate them with a mug of apple cider. Perfecto!

Food aversions: Anything too creamy or milky. Normally I love these kinds of foods – casseroles, alfredo sauce, pasta bakes, creamy soups – but for some reason my stomach does a turn when I even think about eating them now. I have been forcing myself to drink milk though. 1 – because it’s healthy and I could use the extra calcium. 2 – because CJ and I both went out and bought a gallon of milk, not knowing the other one had also done so, and we had 2 gallons to use up before the expiration dates. Oh and CJ only drinks soy. That left me and Munchkin drinking a lot of milk!

I have had smell aversions too. Typically I’m not known for my strong sense of smell. CJ has a nose like a hound so we’ve often had moments where he thinks something stinks to high heaven and I don’t smell a thing. But my super pregnancy hormones have made my sense of smell much stronger and there are 2 things right now that really make me gag: bodily fluids and bad breath.

Due to my weak nasal abilities and strong stomach, I’ve always been the go-to when it comes to cleaning up puke or diaper blowouts. Not anymore. I’ve actually had to call in reinforcements on more than one occasion, when Isabella had a particularly smelly BM. Unfortunately for CJ, he is my back-up. But he’s handled it like a champ.

I’ve just lately noticed that Isabella can have some rancid morning breath on some days. I don’t want to make a big deal of it so I don’t say anything and just hold my breath if she “close talks,” or I turn away and pretend I’m looking for something. 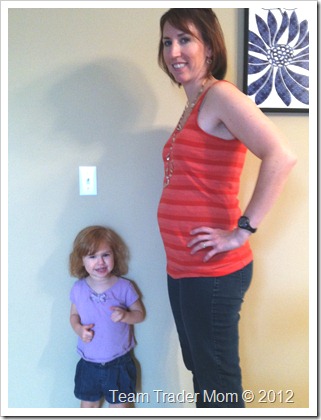 Differences between pregnancy 1 and 2: The biggest difference this week has been burping. I remember when my sister was pregnant for the first time and she let out a big ole belch at a family gathering. We all cracked up and my mom commented that this was normal during pregnancy. So with Isabella, I waited for this to happen to me and it never did.

Well it’s happening now! I don’t rip off really loud belches but I do notice more little burps coming up. I think it’s related to the acid reflux and I hope it goes away soon!

Baby items purchased: I went out and bought a BeBand this week, which is essentially a piece of spandex that you can wear to help transition from regular jeans to maternity and back. I never used them with my first pregnancy but looking back wished I would have. I tried it over the weekend and it worked ok. Tried again today and it worked better. The back keeps sliding up on me though, no matter how low down I pull it. Has anyone else used these? Any suggestions? 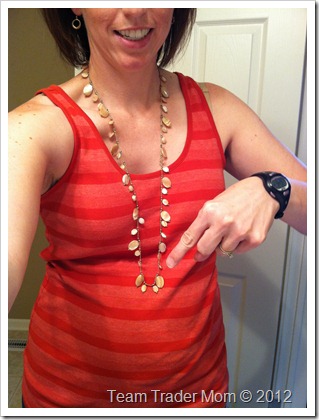 Random Preggo Related events: I’ve been having sleep issues lately. It seems there are 2 extremes these days – insomnia or deep nightmare riddled sleep. Not sure which one is preferable…

The dreams are VERY real too.

In one dream I had over the weekend I was being held hostage by a serial killer. I tried to run and took up refuge inside a closet. As I woke up I could hear his footsteps coming down the hallway.

In another dream, Samson almost got hit by a car. It was a very vivid image of a Ford F150 coming up on him standing in the road and there was nothing we could do. Just seconds before the truck hit him, he moved. When I woke up I could not get that image out of my head. I gave him an extra long hug that morning.

Isabella Moments: Most of her interest in the baby has revolved around me losing my lap. We read a book to her called “The Birds, The Bees and the Berenstain Bears” in which Mama Bear is pregnant. The book talks about how the bigger mama’s tummy gets, the smaller her lap gets. So Isabella checks my lap everyday to see how much smaller it is.

However, the other day she had some more serious questions. She asked me if the baby would play with her toys and I said yes she might have to share some of them, but not for a while. She then got concerned and wondered if she would have to share her ‘big girl chair’ at the kitchen table with the baby. No, the baby will have its own chair. That got extrapolated to food. “I don’t want to lose all my food” she said. I assured her that this would not be an issue.

I never know what goes on in that mind of hers!

So that’s the latest! I will try and post updates every week with new fun and crazy things. I’m sure there will be plenty!

You can get caught up on other aspects of the pregnancy here!