Our New Year’s Eve was quiet but it certainly had some interesting moments. I also got a little glimpse in to what 2011 might have in store for us.

I spent the day cleaning and putting away Christmas decorations so by evening, I was tired. I had run to the store in the morning, grabbing a pizza and some sparkling juice to ring in the new year (neither one of us really like champagne. Last year’s bottle sat untouched in our refrigerator until September when I finally threw it out). There wasn’t enough room in the ‘fridge for either one so I stuck them outside on the deck, figuring it was cold enough out there to keep them chilled. I put the pizza on top of the grill and the bottle of juice on the deck railing, to keep them up and away from any animals, namely Samson.

Mid-afternoon, I let Samson out and then went about my business inside. All of a sudden I heard a “thump” outside and I looked up in  time to see Samson tearing in to the pizza box! He had jumped up and knocked it off the grill and was now trying to get at the contents in the box!! Fortunately, it was wrapped up in plastic and I got there before he could tear through that. However, as I was trying to wrestle him off of it, Isabella came wandering out on to the deck (in my hurry to get outside, I’d left the door open) with no shoes on, which was covered in snow. So here I am, wrestling a 90lb dog off our pizza and also trying to grab a squealing 15 month old who thinks this is a fun game. I finally managed to get everyone inside, and Samson in his kennel. *sigh*

Later that evening, I heated up a pizza for dinner and Isabella happily ate it up, shouting “pissa, pissa!” the whole time. I had bought some New Year’s Eve party hats and noisemakers so I let her play with those while we ate. When we were done, she started running around the house with them.

Let me tell you, those $.99 party hats were not made to stand up to a 15 month old. It took all of 5 minutes for her to get part of the lining off the bottom and crunch up the top of the silver one. Good thing I had bought 3 of them! 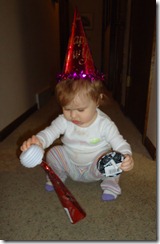 CJ left around 7 for a quick meet up with some old friends and Munchkin, Samson and I stayed home. We were playing and Munch started to get a little, uh, out of control. She was taking the cardboard noisemaker and hitting everything with it. Samson thought this was a game so he attempted to snatch it from her hand on the up swing. I told him “no” and made him sit on the couch to calm down. Isabella then ran over and started beating Samson on the nose with the noisemaker! I had a quick flash that told me “this is what the ‘Terrible Twos’ will be like so get used to it lady”. I took the toy away and scolded her. She then went and sat against the window, pretty much putting herself in time out.

Around 7:45 I put her to bed and started cleaning up the living room. It was then that I realized I still had the bottle of sparkling juice outside! I went outside only to find that the bottle and it’s contents were frozen solid. I mean, there was not one ounce of juice still in liquid form. Crap. At least it hadn’t exploded. I guess that was the upside. I brought it in and stuck it in the refrigerator, thinking it was best to thaw it out slowly.

CJ was still gone so I made up a quick breakfast casserole that would get heated in the morning, and then threw together some nachos. Hey, it’s NYE – I can chow down on a snack of nachos if I want!

I then stuck my “Friends” season 9 DVD in the player and tucked myself in the couch to watch until CJ got home. At one point, I kind of felt a loser for not having a party to go to and sitting by myself, eating greasy food with my “Friends”. But, I got over it and realized that it was actually a good night and I was very happy with my life.

CJ got home around 9:30 and we contemplated playing Wii or a board game or watching a movie. Instead, he joined me on the couch and we continued with my “Friends” marathon. We laughed a lot and what better way to ring in the new year than with humor?

By 11:30, the juice was thawing but still had a block of ice frozen in the center. We ran it under some water until that melted too. As midnight approached, we were ready to toast goodbye to 2010 and hello to 2011. We even let Samson have some sparkling juice. At midnight we toasted, kissed and rang in the new year just right. 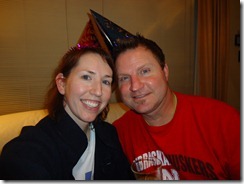 And of course we had to take a picture with Samson… 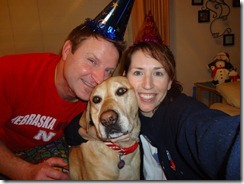 (This picture should have a caption that reads “Help Me!” because he looks like he’s being held against his will.)

While it wasn’t a crazy, drunken, party all night kind of New Year’s Eve, it was still a good one full of everything that is important to me – CJ, Isabella, Samson, pizza, chocolate and “Friends”.

Today will be spent eating and watching football with the family. Tomorrow, I start my 2011 resolutions, which I will post about later.

One thought on “New Year’s Eve”