Samson would like you to believe he’s a big tough guy. 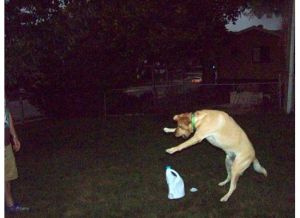 He drools a lot and doesn’t even care. 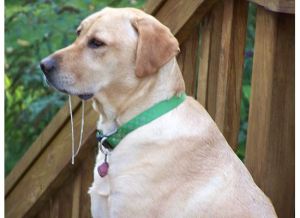 Seriously, that is not a necklace or string in his mouth. It’s 2 long strands of drool that connected at the bottom. He’s so refined…

He refuses to back down. 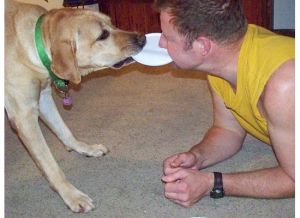 And let’s face it, he’s a big dog. 90 lbs of solid muscle. Yet, when you get to know him, you see through the cracks in his exterior to the soft little puddle on the inside.

And you learn he’s a big scardy cat.

He hates water. Yes, we have a yellow lab, dogs built for hunting and snatching prey out of the water, and he’s doesn’t like to get wet.

He also refuses to go outside at night or early in the morning when it’s dark. I mean, there might be raccoons or something out there!

His newest phobia? The floor register in my bathroom.

As part of getting our house ready to put on the market, we are painting our master bedroom and bathroom. CJ started the project over the weekend and as part of it decided to buy new floor registers (the old ones were starting to get rusty). So there was a square-shaped hole in the floor of the bathroom for a couple of days.

I talked a while back about Samson’s typical day and an important part of it is “helping” me shower in the morning. As soon as I turn the water on, he comes in the bathroom and sits down against the wall. I give him a treat and then he lays down until I’m done showering. Keep in mind that my bathroom is small so there’s not a ton of room. Once he lays down, he takes up the whole floor and therefore must lay on the register. 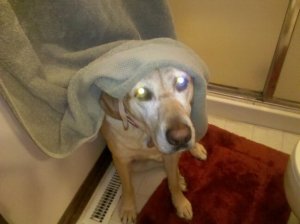 Normally he likes that. In the winter, there is warm air spilling out and in the summer, cool air flows from the magic floor.

However, this weekend, there was a big hole where the register used to be and he was not having it. I went to take my shower on Sunday and he followed me in, per usual, but stayed as far away from the hole as possible. Then he left. Then he came back and stared at it. Then he stuck his head between my legs, looking up at me. I could see the fear in his eyes, like the hole might swallow him up. I tried to tell him it was ok, that he wouldn’t fall through if he laid on it, because he’s ginormous. But he didn’t believe me. So he scurried out in to the bedroom and refused to come back in.

The next day, the new floor register was in but Samson was still traumatized by the gaping hole from the day before so he came in the bathroom but sat next to the register, not on it. He wouldn’t get anywhere close. However, at some point during my shower, he fell asleep and in his unconsciousness, rolled over on to the register. He didn’t notice until I got out of the shower at which time he awoke, jumped up and ran out. Dork.

That’s the way it’s been all week. Finally yesterday he braved it, laid on the register and didn’t die. We were all grateful and there was much celebration.

CJ finished the bedroom last weekend but is still working on the bathroom, as time allows. Last night he got it all taped off and cut in. Naturally, that meant that there was blue tape all over the bathroom, including on the floor by the baseboard.

As soon as Samson saw the blue tape this morning he backed up and slowly exited the bathroom. Then looked at me, looked back in the room and back at me, as if to say, “Mom! There is danger ahead! Enter at your own risk!”

It’ll probably take another week before he is brave enough to resume normal showering routines. Maybe I’ll mess with him and remove the rug.

I just hope we don’t ever get robbed by someone carrying a floor register or watering can. We’d be so screwed.