This was by far my favorite You Capture assignment. Maybe because it was so easy! You don’t have to search too far to find an ordinary moment – they’re all around you! The hard part was picking from amongst them all.

The first one I captured was Samson.

He has 2 favorite spots in the house where you can find him laying most of the time – by the back door and the front window. Both give him great vantage points of the neighborhood and other dogs that might be walking by!

While Samson was laying there, Isabella was in her rocking chair watching Mickey Mouse Clubhouse with all her friends. 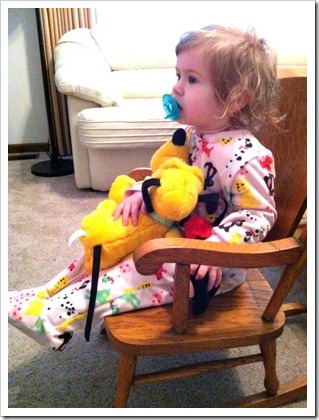 That Pluto dog she’s holding was actually mine as a kid. It’s in remarkable shape, probably because I was more in to Donald Duck than Pluto. And now it’s Munchkins’! She also had 2 Mickey’s and a Minnie piled on her lap.

Before too long, it was time to play! 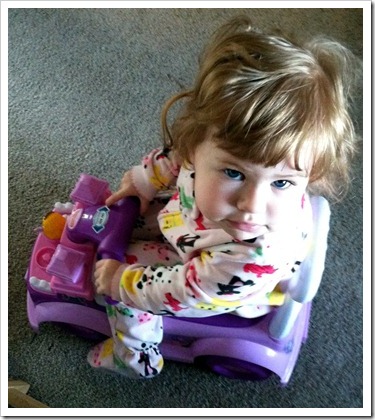 We dug this Princess car out of storage over the weekend. While the house was on the market, we had to minimize her toy pile in an effort to keep the house presentable, but we don’t have to worry about that anymore!

Later, Isabella and I went to the park. She wasn’t as in to some of the equipment as she normally is.

Or else she was tired of having her picture taken. More often than not, these are the kinds of shots I get. There are 5 of these for every 1 cute, smiling and happy one. I’m all about keeping it real here people!

She likes to help me push the stroller on the way home.

Only she doesn’t steer very well so we run aground a lot. Especially when I’m more focused on taking a picture than helping her. 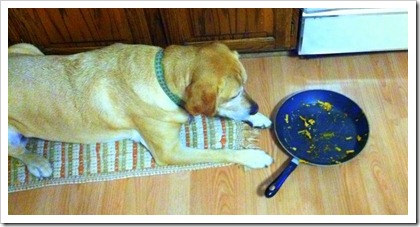 Here we have Samson waiting patiently for me to release him. Because he can be so spazzy, we make him work for stuff. He has to sit before going outside, wait before eating, and shake before getting treats. He laid here for a good 2 minutes while I was taking pictures. Such a good boy!

{Note: that pan is what was left of the sour cream-less dinner from the other night. Apparently it was good even without the sour cream!}

And now, the following is a public service announcement for all you would be parents of toddlers out there. Please observe this illustration of the emotions of an almost 2-year old and how quickly we can go from this… 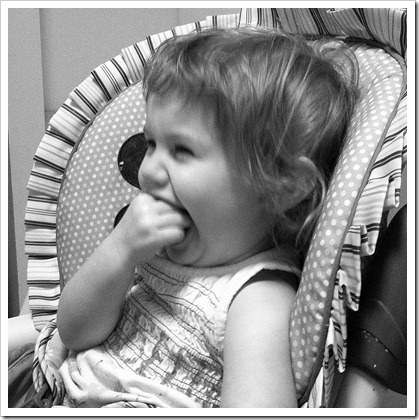 And then pretty soon she was happy as a clam again because we were all at the playground together.

While there, we found some sidewalk chalk that had been left behind by some other kids. We all sat at a table there and drew dinner plates on it. 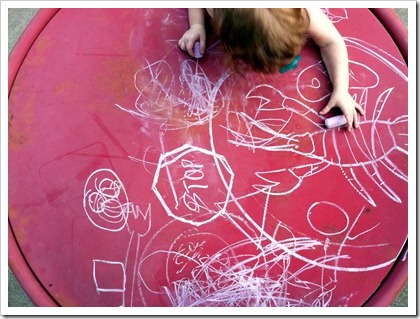 Mine is at the bottom – I had rice, chicken and grapes. Then Isabella colored over it with “spaghetti”. CJ’s is on the right – a giant lobster and steak. We also drew shapes.

Well I think that’s enough for today. You can see more ordinary moments by checking out my day in the life of series, parts 1 and parts 2. Or you can go to Beth’s and see what she and others did!

2 thoughts on “You Capture: Ordinary Moments”