I thought I’d take a break from writing about our vacation to talk about chances, fate and destiny.

You know, a light-weight topic.

I was inspired by this post from Caitlin at Healthy Tipping Point. She talks about all the different paths our lives could have taken if only one thing or another had been different. She was inspired by the movie “The Adjustment Bureau“. There was also a movie with Gwyneth Paltrow that touched on this called “Sliding Doors“

To be honest with you, this topic fascinates me and I think about it quite a lot. There are so many things that happen in life of which I had NEVER expected. My college roommate used to say “If you’d asked me to bet that ____ would happen, I’d have lost the best!”

Here’s one small example –  3 years ago I was drafted on a co-ed volleyball team. I knew no one on the team. One of the gals was also named Sara and was new to the city. We got along well on the court but didn’t hang out much otherwise. I was honestly quite jealous of her because she’s a great player and has a magnetic personality that draws people to her. I wanted to BE her! When that session was over we went our separate ways on to different teams. The next summer I ran in to her at a pick up volleyball game and it just so happened I needed a new gal for Team Trader. She joined the team, we started hanging out and now we’re close friends! Had I bet on that 3 years ago, I would have lost money!

I often times think “what if” this or that had been different. What if I had gone out for the high school volleyball team? I wanted to but was chicken and never did. If I had, I might have become a great player and gotten a college scholorship. Maybe I would have gone on to play in the Olympics! But then again I would have had much different friends in school, gone to a different college and my life would be totally different. Would it still have been a good life? Probably. But I wouldn’t have met CJ and I wouldn’t have Isabella.

Or would I? If something is truly “meant to be”, would CJ and I have found each other anyway? I guess we’ll never know!

As it turned out, I met CJ at a social event. He was at the door greeting people and I was there with my current boyfriend. He actually made a comment out how “hot” CJ was and no wonder I wanted to come to the event. My ex and I broke up shortly after that. Then I started attending support groups to help me work through some emotions about it and CJ was there. We became friends. Later, my friend Jason invited me to a pick up volleyball game and CJ showed up. We started hanging out and a year later I asked him out. The rest is history.

What I do know is that I don’t regret any past decisions in my life. Some were good, some were bad. But all of them led me to the place I’m at today, which is a pretty good one. I have an amazing husband, a beautiful daughter, an awesome dog, a successful career, and a loving family. No I’m not a millionaire or an Olympic gold medalist but I don’t need to be. My life is perfect the way it is. 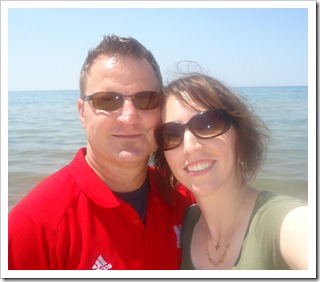