Last night I had to swing by the grocery store on my way home from work. This is a pretty normal recurrence in my life. Usually it’s for things like milk and bananas and this trip was no exception.

I had a long day to begin with and was looking forward to getting home and having some quality family time. My plan was to jet in and out of the store – fast as lightning!

The universe had other ideas.

I got to the store and scored rock star parking. Yes!! Like a good little environmentally friendly girl, I went to the trunk to get my canvas shopping bags. However, I had forgotten that my car was loaded down with like 50 cardboard boxes (flattened) that I had snagged from a co-worker. 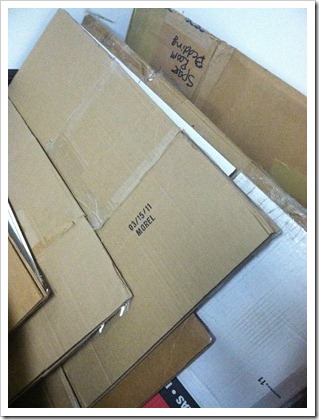 Not sure how I could have forgotten this since they were precluding my view in the rearview mirror the whole drive, but somehow I did. Anyway, I open up back (I drive an SUV) and half of the boxes came sliding out, all over the parking lot.

Shit. That’s what I said. I stood there in a daze, not quite sure what had just happened and then said “shit” out loud. Some guy walking by looked at me and kept going.

I couldn’t just pick them up and throw them back in because they were slippery little guys and would just slide right out. So I had to wrestle the door closed and somehow get all those boxes back in the car. One by one I slide them in through the rear driver side door and over the back seat into the trunk. Several people walked by and stared. No one stopped to help. They must have thought I had just gotten the boxes from the store. I let them think that.

When that was all done I made a beeline inside. There was an old woman dawdling by the carts so I scooted around her and grabbed the closest one, not realizing it was one with a busted wheel until I was half way in to the store and tried to turn it.

Shit, I said again. I HATE getting carts that are jacked up. It makes the shopping experience that much worse. I already hate grocery shopping, and now I have to wrestle with my cart. But I was in a hurry and didn’t want to turn around and dodge the old lady again just to get a new cart. I figured I’d deal with it.

So I spent the entire shopping trip manhandling this cart. I had to strong-arm it with my left hand to keep from veering right. And when it was time to turn, I had to practically pick the thing up. I’m sure I looked really cool, leaning all my weight in to this cart while balancing on 4 inch heels. 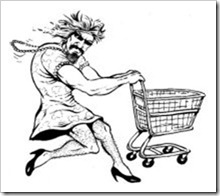 And then the store didn’t even have 3 of the items I needed.

I got everything I could and headed for the check out. I ended up in line behind some gal who bought 10 boxes of granola bars thinking they were on sale for $1.99 and not realizing you needed a special coupon for that. So she pitched a fit until the cashier caved and gave her the cheaper price.

While waiting, I checked my phone and saw I had a voicemail from CJ. He was asking me to grab sour cream for our dinner that night. I wasn’t about to get out of line and take the gimpy cart to the very back of the store so I decided to pay for what I had, then set the cart aside and run back for the sour cream, paying for it separately. I could have just pretended I didn’t get the VM but that would have been wrong. After all, a sour cream-less dinner is just criminal.

It was finally my turn and I checked out with no problem. I then parked my cart, ran back for the goods and was soon headed out the door. Guess what? The cart from hell is even harder to operate when you get it outside on the concrete. I was literally leaning sideways on this thing trying to get it down the aisle. The same guy who passed me earlier, when I had boxes strewn all over tarnation passed me again and I got another look, like wow, this lady has problems.

I got to my car and almost – ALMOST – opened the trunk again. I had my hand on the handle and everything. But I remembered at the last-minute and dodged that bullet. Due to all the boxes though, the only free space available was Isabella’s car seat. I was able to cram 2 paper sacks, 1 plastic one and a box of baby wipes into the car seat and on the floor in front of it, all the while avoiding door dinging the car next to me. What can I say, I rock.

I was tempted to leave my cart where it was, behind the car, and simply back over it, putting both it and any future shoppers out of their misery. But I didn’t want to scratch my car. So I practically threw it in the cart corral. I thought about leaving a note on it that said, “My time is done, please put me to sleep” but didn’t. 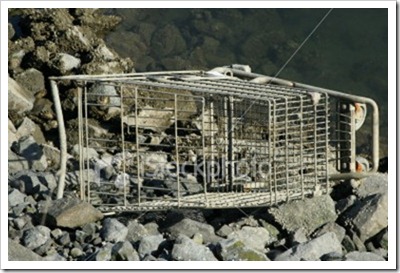 I drove home and again went through the process of wrestling the groceries out of the car seat and up the stairs. I arrived just in time for dinner, which was already finished, sans sour cream. *sigh*

The Customer is Always Right! Right?