Ya know, other than getting a bigger belly, I really don’t feel pregnant. For all intents and purposes, I feel the same as I always have. Sometimes I forget that I’m growing a human in me until I try to do something that my new body won’t allow (sleeping certain ways, bending or twisting, putting on any of my regular clothes). I remember this from my first pregnancy. I thought, what’s the big deal? This pregnancy thing is EASY!

Oh, how naïve I was then.

Food cravings: No new ones. I keep waiting for the really bizarre ones to kick in – the proverbial ice cream and pickles scenario – but no dice. I didn’t have any odd ones like that with Isabella either. I guess I’m just a straight forward, plain Jane kinda gal!

Differences between pregnancy 1 and 2: I’m peeing a lot more this time around. TMI? Sorry, but it’s true. I don’t necessarily go more often, but when I do go, it’s a lot.

Remember that scene from “A League of Their Own” when Tom Hanks’ character stumbles into the locker room and proceeds to pee for like 5 minutes straight. One of the gals remarks, “Wow, now that’s good peein’.”

That’s how I feel. It just keeps coming! I guess the little one’s elimination system is working well!

Between Isabella and me, the bathrooms are really getting a workout at the Trader house!

Baby items purchased: I went out and got some new maternity clothes. While buying maternity clothes at Goodwill is a nice idea in theory – i.e. getting the clothes for super cheap – it does have its downfalls. For one, the selection is really limited. Most stores only have half a rack of items. Also, the items tend to be well worn. Let’s face it, during pregnancy, we wear the same small set of clothes over and over for at least 9 months so by the time we’re done with them, they’ve definitely seen better days. Also, they don’t really have the latest styles.

So…I went shopping. I’m really trying not to buy that many new clothes this time around since I know it will be my last pregnancy (I’m too old to keep doing this). But, at the same time, when you need something, you need something.

Here’s what I got. 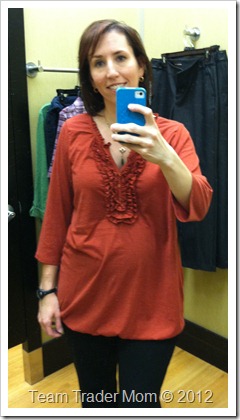 I thought the rust colored top would be perfect for fall and I liked the style. It’s a little big on me yet but it won’t take me long to grow in to it!

Also, no, that’s not major cleavage, it’s just my necklace.

Also, this light-weight sweater and jeans. 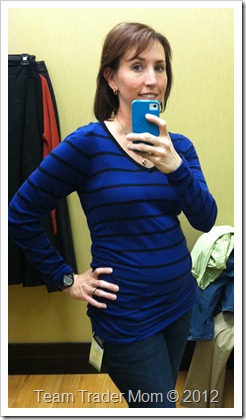 Wow, I look much bigger from the front than the 3/4 view. Guess I’ll have to make sure I always come at people from an angle!

One item not pictured is my new underwear (you’re welcome). They make maternity underwear but instead of buying those, I bought a size bigger of the regular kind. Or at least that was the plan. Only, I was in a hurry and it’s been SO long since I bought new undies that I was more concerned about the cut and the color (2 very important aspects, thank you very much) that I forgot to check the size. I just grabbed the first ones on the rack.

I realized it when I got home. Thankfully, the gods of undergarments were with me and I ended up with ones that fit (and are super comfy to boot!). Another win! 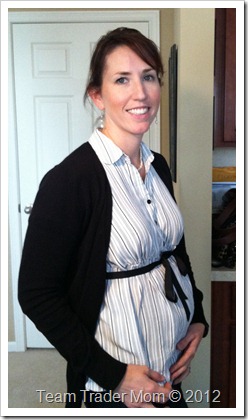 Today I feel like a million bucks. I have on the outfit above – my new jeans which not only fit but are a cute style AND a darker wash to help me look skinny, new undies, a blouse that I had from my first pregnancy which I was surprised to find fit really well, a cardigan from Old Navy and my super sassy red heels. 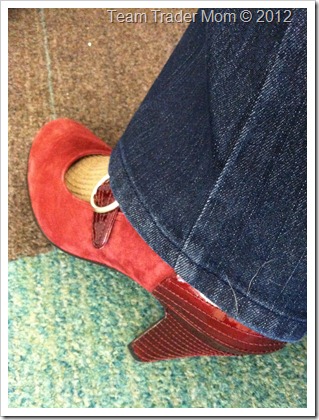 The heels may not be the most comfortable shoes in the world, but they’re not bad either. And I feel jaunty when I wear them.

And you know what? A jaunty pregnant woman is a happy one indeed and I think we can all agree that THAT is a good thing! [CJ’s vigorously nodding his head]

Random Preggo Related events: I had my first Sneeze Pee. Time to start doing the Kegels!

Wow, this post is full of TMI isn’t it?

Isabella Moments: Munchkin has switched sides and decided she now wants a baby brother. You’ll recall that a few weeks ago she was all about having a sister. No longer. I’m sure it’ll go back and forth 213 more times until we find out at the ultrasound or the kid is born.

Oh, and just because I need to add some cuteness to this post, here’s what I found in the bed when I got out of the bathroom this morning after my shower. 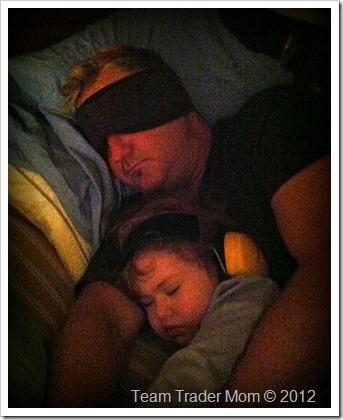 She kept waking up crying so CJ brought her in to our room. So with him wearing an eye mask and her wearing headphones, does that mean I have to wear something on my nose to complete the trifecta? Maybe a Breath Right strip or something.

To see how the previous weeks have been, click the links below!