Happy belated Birthday to me! Yep, Wednesday was my 36th birthday. To me this is the first year that I think my age sounds “old”. I know that it’s not and I’m sure my 50 year old husband is rolling his eyes at me right now. I don’t FEEL old or consider myself old. It’s just the number that sounds old. People generally refer to young people as in their 20’s or “early 30’s”. With 36, I’m officially crossing over the mark from early 30’s to late 30’s. 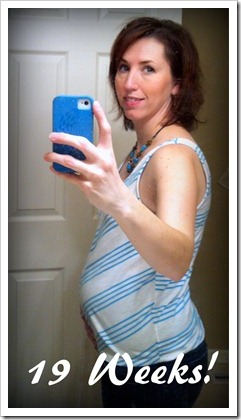 Does this belly make me look older?

Plus I get to have the label of “Advanced Maternal Age” (or AMA) on my chart at the doctor’s office. If that doesn’t make a person feel old, I don’t know what will!

All that being said, I am truly thankful for another great year in my life. As we all know, the gift of life is precious and can be taken in an instance. Every child, every person, is a miracle and the fact that I’ve been able to enjoy 36 relatively trauma free years on this planet is not lost on me. So thank you to everyone in my life who has helped me celebrate this week! 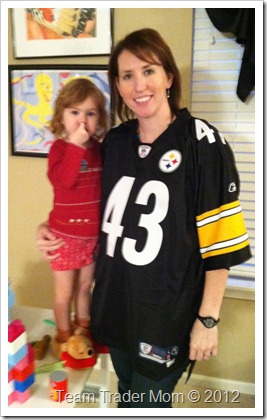 Yes my daughter is picking her nose.

Who cares, I got a Steelers jersey for my birthday!

Now let’s party (safely and without any alcohol of course)!

Exciting Pregnancy Moment that Never gets old: This week I experienced for the first time in this pregnancy one of the things that makes every pregnancy fun – baby movements and kicks! At my 18 week appointment the doctor asked if I’d felt any yet and I said no. She said not to worry that it was still early for that but of course my mind started working overtime. Combine that with the fact that it took her longer to find the heartbeat and I was really getting nervous.

So every day I would pay extra special attention to any ‘sensations’ going on down there. Turned out to always be gas or stomach gurgles or something of the like.

Until Sunday. I was lying in bed listening to Isabella slowly wake up when I left a flutter. That’s how people typically describe baby movements at this stage – flutters. It was more like the feeling of a bubble popping. I quickly put my hand over my bump and waited. Pretty soon there was another one! Yippee! I knew for sure that these were the real deal. I’ve been feeling them steadily ever since. They’re too small and sporadic now for anyone else to feel but soon CJ and Isabella will get to experience them too. I can’t wait for Isabella to feel her first baby kick from inside mommy!

Food, glorious food: Surprisingly there haven’t been any cravings for a while. No revulsions either. Just normal eating. I did however down 3 big brownies from a bake sale in a 2 day period and then felt indignant when CJ wouldn’t share the last one with me. But I guess he’s allowed to have one…

Speaking of CJ, he’s been dropping some weight lately. I think he said he’s lost about 10 pounds so far. I can see it too. Not that he was fat before because he certainly was not. But like all of us of “advanced age”, he’s put on a few unwanted LBS over the years. Kudos to him for the loss! He looks great!

Is this how osmosis works? My husbands extra weight falls off him over night and then crawls it’s way across our bed and sticks to me? I just hope that come Spring of next year, the weight will fall off me too and find it’s way out of the house entirely! Unless of course it wants to stick to my wallet and fatten that up. I wouldn’t be opposed to that.

Gender Issues:CJ and I still haven’t decided it we are going to find out the gender of the baby when we go in for our ultrasound in 3 weeks. Well, let me rephrase. CJ knows what he wants – he wants to find out. I’m on the fence but leaning toward waiting. We have yet to sit down and duke it out to come to a mutual decision.

My doctor has predicted that it’s a girl. She told me this last week. When I asked her why she thought so (was the heartbeat particularly female sounding?) she said “Oh I don’t know, Doctor’s intuition.” I guess we’ll see if there’s anything to that intuition!

Oh, my Back! I’ve started getting pains in my back. Lower back that is, specifically on my left side. I know it’s because of my hips moving and spreading. I don’t remember feeling anything this early with Isabella. What can I say, I’m older. It really hurt me after volleyball last night. I had to come home and ice my back for nearly an hour before bed. And of course I can’t take anything. Well, I can take Tylenol but that does nothing for me. I just have to be extra careful with my bending and lifting.

Nursery update:Getting the nursery set up is sort of the last thing on my mind right now. I figure that we’ll get started on that sometime in January, once the holidays are past us. However, I did make a small dent the other night. See, the room that will become the nursery is currently empty. The previous owners had it decorated with pink and purple polka dot decals on the walls so Isabella lovingly calls it the Polka Dotted Room. Well, we were playing around in there the other night and I started peeling off the little dot decals. Some of them came off easily and others took some paint with them. No big deal since we’ll be repainting the room anyway.

However, Isabella was very upset at me for taking down the dots. “But this is MY polka dotted room!” she said! I explained to her that this was going to be the baby’s room soon and the polka dots would have to go. I did promise her that she could put up some dots in her room though. Right now she has flower decals on the walls and her room is pink and purple. But in order to make sure she wasn’t feeling left out while we’re spending all kinds of time on the nursery, we said she could pick out new colors for her room and paint it too. She wants blue. So I’ll probably try to find some kind of blue or white or chalkboard dots for her new blue room. Then she can have her own polka dotted room.

As for how we plan to decorate the nursery, well I’ll give you a hint this week and get in to more of the details in a later post.

Previous weeks, in case you missed them: