I haven’t posted about Operation Dream Home in a while because, well, there wasn’t much to say. We’ve had a few showings here or there, all with good reviews. Everyone who has looked at our house has liked it, yet none were willing to go so far as to make an offer. Frustrating.

A month or 2 ago, out of desperation, I went to a local religious store and bought a St. Joseph statue, who is supposed to help you sell your home. The directions say that there are no real guidelines for where to put him (i.e. front yard, back yard, by the FOR SALE sign, buried upside down, etc) so long as you believe and pray faithfully.

I guess we weren’t praying enough because it didn’t do jack.

Then, 2 weeks ago I moved him. I went with superstition, and recommendations of a few friends, and buried him upside down right beneath the FOR SALE sign. 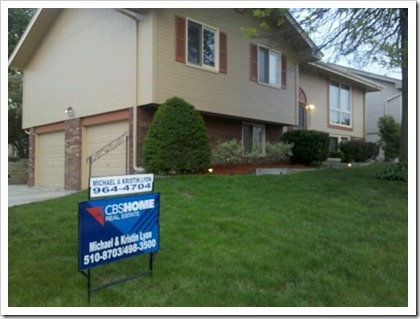 That night we got 2 showings, followed by 2 more the next day. One of those showings yielded someone who was interested in making an offer, she just needed to get pre-approval first. Well, that ended up not panning out.

But the steady stream of showings continued. Things were looking up!

Last Thursday we had one such showing. I was still sick from that pesky sinus infection so instead of playing volleyball, as I normally would be doing on a Thursday night, I vacated the house and took Isabella out to dinner. When we returned, they were still there so I circled the block, than casually parked 4 houses away – far enough to not be noticed by them but close enough for me to see when they left. I’m totally stealth like that. A few minutes later they walked out, smiles on theirs faces and left. I waited a few more minutes and then pulled in the driveway, wondering if I had seen the future owners of our house.

Turns out, I had.

They made us an offer yesterday. As offers go in this market, it was a decent one. However, it was almost 5k less than our asking price AND they wanted us to pay closing costs. The kicker was that they asked us to be out of the house on 8/29. Yes, you read that right – a mere 4 weeks away!

We met with our realtor, who is totally awesome by the way, and decided to counter. We agreed to pay the closing costs but only if they would pay the asking price and move the date of possession out to 9/30, thereby giving us an extra month to find a new house and move.

Our agent left us at about 9 p.m. with promises to call their realtor and tell him our offer. 30 minutes later he called back to tell us they had accepted.

I kid you not, as soon as we hung up the phone, CJ grabbed my hands and we started jumping up and down in the middle of the hallway. Samson ran up to join in so we grabbed his paws and all 3 of us did our happy dance!

What an amazing feeling to not only have sold our house but under conditions that we were comfortable with and no hassle what-so-ever. They could have come back and tried to haggle down the price, but they didn’t. They must really have fallen in love with our house, which makes this all the more sweet. We found out they are an engaged couple, getting married in a few weeks. Ours will be their first home as husband and wife and I am honored by that. After all, this was CJ and my first home together and it’s only fitting it should be handed off to someone in the same boat.

And I don’t have to make the bed ever again!

Officially Official and Other Stuff

2 thoughts on “Thank You St. Joseph”